I've stuggled with the bedroom ever since moving in. The room isn't huge, but it isn't tiny either. It has one wall taken up with the door and closet, and two of the other three walls have windows (which makes bed placement challenging.

We've literally had our bed in about 6 different positions in the room.

Add to that 3 dogs that like to sprawl out on the floor (well, one of them also loves her kennel) and it makes nighttime bathroom walks an obstacle course.

Finally though, I think I've narrowed in on a solution, color-wise at least. I think I've determined a room layout solution too, but that's for another post.

But to recap, here are the colors our bedroom has gone through: 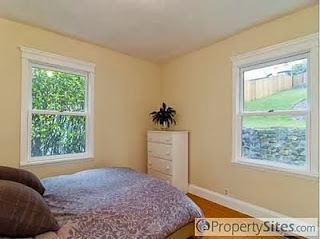 The bedroom was a tan when we bought the house. I should note: the color pops more on this photo than it did in real life. The window trim blended in with the wall color, which was the same as it was in every room downstairs except the kitchen. 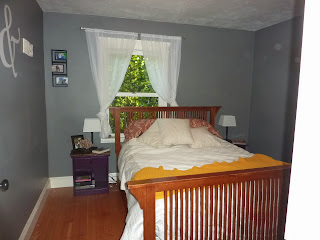 So, we went a little crazy and painted the walls gray. We thought we were all hip to the max, but after almost a year, it just wasn't hacking it. It was really cold. The tone of the color was good, but it wasn't warm. 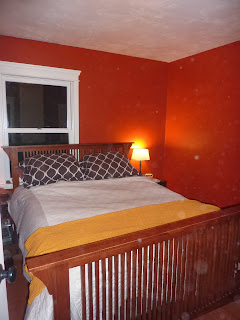 We decided to bite the bullet and paint the walls orange. This lasted for a while, but after again, about a year, we decided the orange was overpowering. Everything was wood-toned. The floors were a medium brown, the walls were orange... it was just a bit much. 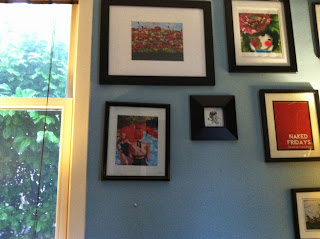 So, this past April (yes, only about 6 months ago), I painted the walls a lighter blue. I liked it at first, but it lacked depth and warmth. It also felt a bit too baby blue.

We did add a frame wall to the one wall, but our bed was against a different wall and the frame wall never felt right (more on that in the next post). 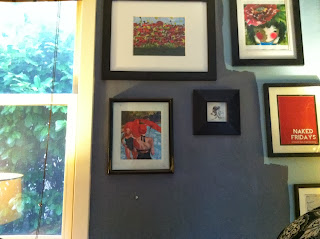 Yesterday, I began the job of painting.... again. The new color is one that I think will last a while. It's called "black pepper" by Benjamin Moore. 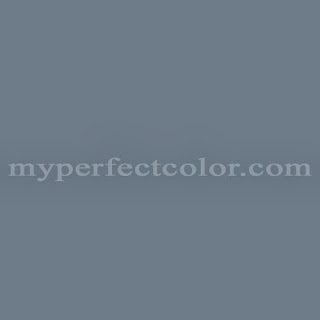 I've decided that I really go for colors that cannot best be described in one word. This color is not blue, it's not gray, it's not purple... but it has hints of all three. As the light changes in the room, so does the color.

As of right now, I'm about halfway done with the room. I'm hand-painting it this time, since rollers don't give us great coverage on our walls and I actually have a nice paintbrush.

I'm getting a really nice feeling from this, like that maybe, after 2.5 years of a lot of changes, we may have settled upon the color that works. Next up: the layout that works....!

The front by the garage before...

And the same spot now...

We are almost done!!!