Our two corgi girls needed to be groomed. We went to the dog park on Sunday as sort of a last hurrah, and THIS happened: 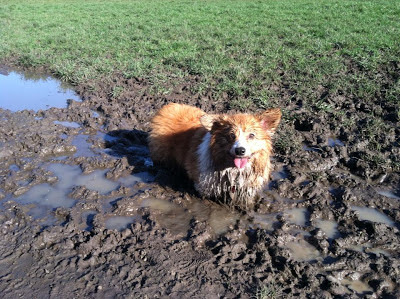 Yes, it was bad. REALLY bad. This photo was taken before Roxy discovered she could dip her head in the mud. Maddie's love of mud is just as bad. I'm debating which corgi to nickname "hippo" and which one to nickname "piglet" (since I already call Roxy "my piglet" sometimes, I think Mads might get "hippo."). Bailey's not so bad since he's so tall. I can handle muddy legs.

Fast forward to today and both got groomed (Bailey was SAD but stayed home with a pig ear). Their feet were trimmed, their bellies shaved (you can't tell when they're walking around, but roll them over and there are NO MUD DREADLOCKS!), and a special shampoo to help get the dead-but-caught-in-their-coat fur out. Private bits also trimmed up and Roxy had some of her butt fluff trimmed -- her's gets kinda matty, where as Maddie's stays all pretty, so Maddie kept hers. Roxy's behind looks like a little bear butt right now. SO ADORABLE. 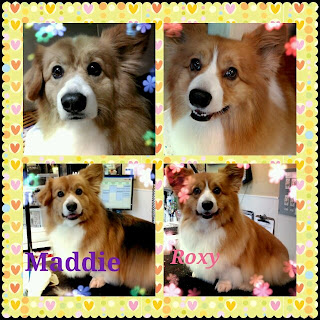 I love our pretty girls! Bailey keeps smelling them. I think he thinks they might have been dipped in biscuits because there's the occasional lick. :)
Posted by Jessika at 7:20 PM