Every year, I find myself sitting down and writing springtime to-dos. Last year, it was the deck.... a project which left me so wiped that I didn't do much else for the rest of the summer.

Hm, maybe not. I did also re-side the chicken coop....

So, I suppose some things got done last summer.

This summer, it's more of the same. After comparing the price of pea rock versus deck 2 and the costs being about the same, I get to build deck 2. It's going right next to deck 1, and it will be the same size: 20'x14'.

This deck gets a pergola over the top of it. However, since we chose a metal canopy for deck 1: 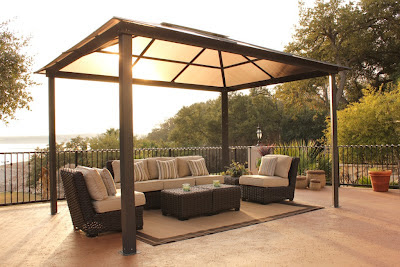 ... I thought that we'd go with a metal pergola for deck 2 (You know, for some consistency and then we wouldn't have to replace rotten wood in a few years). I found this one for not a bad price:

So, I think we're going to go with this one. It looks VERY close to the price of our canopy. If it isn't, we'll paint it (probably spray-paint).

I envision a final deck area looking like this:

I love the greenery!! If I can get the deck done in the next few months, we can plant and maybe even get some green for shade this summer. That'd be pretty splendid.