B and I went wine tasting on Saturday. It was a gorgeous day. We mixed in some pumpkin patch visiting with our wanderings too. 2 orange carving pumpkins, 3 decorative pumpkins and one gourd later, we were off to Yamhill county.
*
We found out that there are 395 wineries in Oregon. WOW! We love the countryside where the vines are. Actually, I think meeting new people and playing outside are our favorite parts of visiting wineries. It is so pretty. Even if you don't like wine, I think you would have loved to come with us. It is so idyllic. 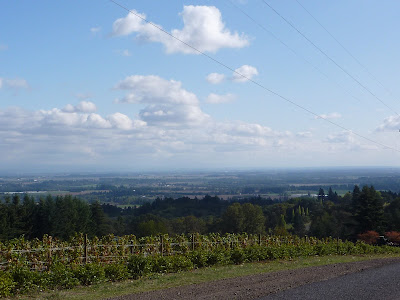 Here is the view from one winery.
*** 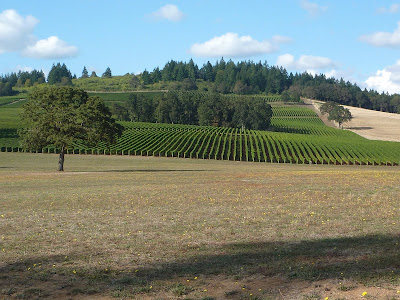 And the view at another winery. They had frisbee golf baskets set up and you could play around. Maddie romped in this field and everyone came out and played with her!
***
We brought Maddie with us and she was a very good girl in the back seat. Most of the time, she just SIGHED dramatically when we looked back at her. I think cars are boring if you have to really stretch yourself to see out the window. Just wait till you get a little bigger, pup. The day was pretty cool out, so she got to stay in the car sometimes, sleeping. She was SOO tired by the day's end. 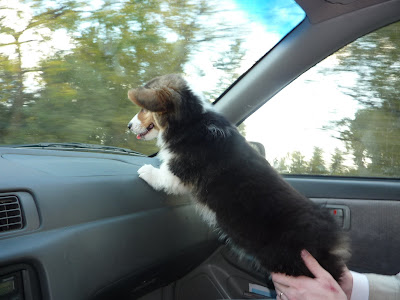 On one of the back roads, we let Maddie into the front seat to look out the window. She was SOO excited.
*** 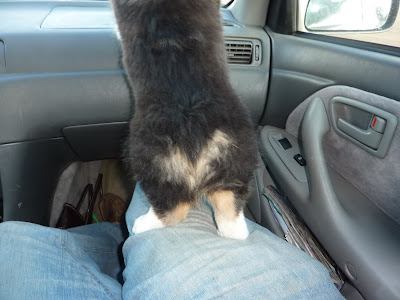 B took a picture of her bottom. SIGH. Her little stub tail was wagging happily as she balanced on his leg... and then....
*** 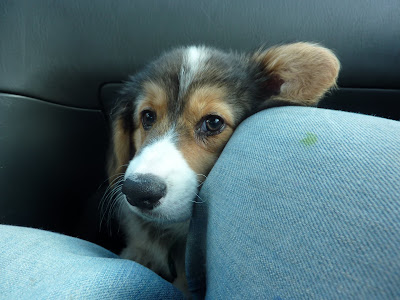 When we got home, Maddie instantly began playing with her favorite friend, Rumpole. He is such a motherly cat. He watches out for her and lets her pounce on him, chew his ears, you name it. We have a back room for the cats that they can get to and Maddie cannot. Plus, if they're on the couch or on a chair, they're out of her reach. So, it's not like they HAVE to interact with her. But Rumpole, he asks for it. 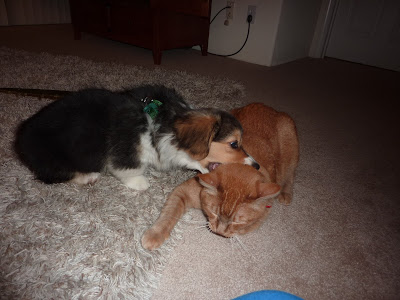 Cat abuse? Nope. He asks for it. He also enjoys batting her (non claws out) on top the head just to rile her up to get her to tackle him.
*** 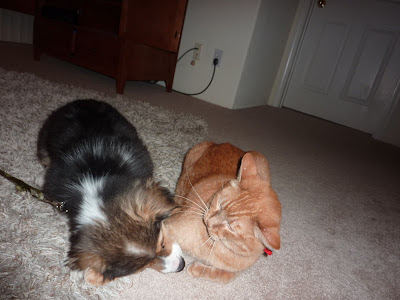 We've also been entertained by Maddie's ears. We knew they'd go up and down until they finally stay all up all the time. But seriously. Every day it is different. At the wineries? One ear up, one down. With my parents last weekend? Both ears up. Last night: Both ears down. 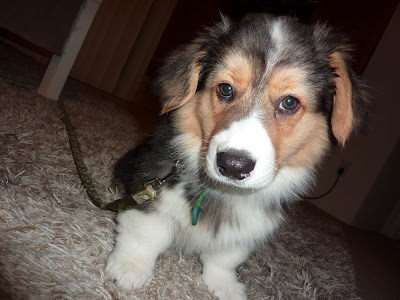 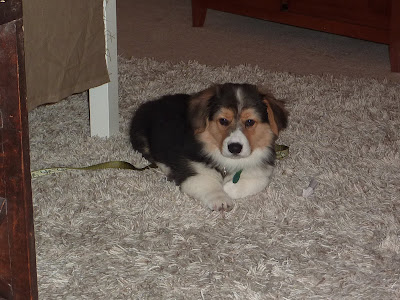 Little girly pup sitting on her favorite rug, both ears down, WAITING for Rumpole to come over and play.
***

But what she really loves, is B. LOVES him. I like trying to catch them hanging out together. I swear she imitates him. But maybe I'm looking too much into things.... 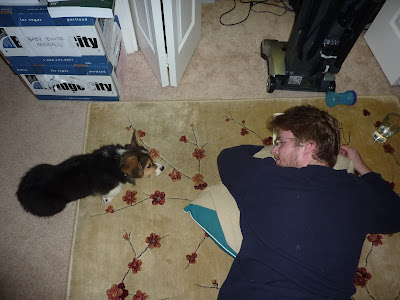 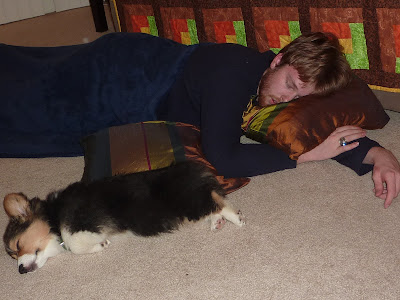 So that was basically our weekend. Out and about on Saturday, enjoying the weather. Sunday dawned rainy, so we had a fun day doing nothing indoors. And the pup? So good. No accidents this weekend! We still have to monitor her (she hasn't gotten the "go to the door when you need to be let out" thing), but she was so good this weekend.
Posted by Jessika at 9:35 AM