Someone is playing a game. It goes like this: Pick up the stuffed football. Drop the football. Stare at it while wagging tail. Pounce with the vigor of a bucking bronco. Repeat. 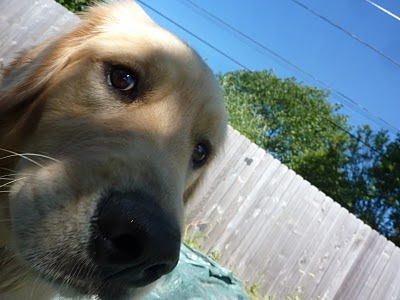 He has questionable taste.

Everything this dog does could be ended with the phrase "and it was great!!!"

For serious. This is the dog that will whunka whunka his tail even when he knows you're mad at him.

Though, he does have a thing for picking up and dropping things. The outside version of football drop? Pick up the tennis ball. Walk over to pile of tree trimmings. Toss ball gleefully into pile. Ball falls inside, amongst branches. Dig at pile until find ball. Pounce on ball with same gusto as above. Repeat.

I swear we play with him.

However. This is also the dog that has managed to knock over (probably due to the gusto mentioned above) three cans of paint I had outdoors for the coop. And because I was stupid and didn't think the golden's tail would knock them over, I hadn't pounded the lids shut.