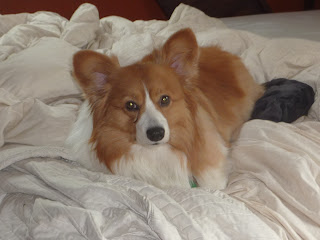 This is Roxy. She's a 5-year-old fluffy red-and-white corgi, and she's ours. The golden retriever? Happy happy happy (when is he not?) about this new development. Somehow Maddie, our other corgi, knew this was a permanent interloper addition and she was a tad cool, though that only lasted a couple of hours and now they get along like peaches and cream. Mads just had to let her know who was boss.

She needs to lose about 10 lbs, and she will be getting a teeth-cleaning in the next two weeks (a couple of bad build-up spots that could result in a gum infection if not soon removed). She has slight lower back pain, so we're giving her a small tablet every morning, that way she has no pain and can easily romp around with the other two dogs (and not have it inhibit her weight loss exercise!).

To say she loves being on the bed is an understatement. We've moved our mattress and box springs onto the floor so the corgis can jump up (Mads could already, but we were worried about her someday hurting her back). Mads and Roxy think this is swell. Mads leaves after a few minutes (she likes cold floors), but Roxy turns into a rock and stays for HOURS.

I took the two corgi girls over to a friends house yesterday. LOVE! They had so much fun in the car together and looking out the windows. And yes, they took turns. Roxy got to car surf on the center console on the way back (front paws on the console, back paws on the rear seat), Mads took the side window. They had switched from the set-up they had when driving over! Poor Roxy is a bit plump and when she jumped in the car, she got wedged between the front seat and the back seat and needed a bit of help getting onto the back seat. We're working on that, dear.

Both corgis garble-talk when playing. It's ridiculously cute. And, rather than breaking into a full bark, they both "BUFF!" as a warning half-bark, half-growl. Two buffers! The golden retriever tries to imitate and sounds like a foghorn.

Pretty great. Oh, and here's a video! http://www.youtube.com/watch?v=0w0WBwr0G30&feature=youtu.be
Posted by Jessika at 8:00 AM