Paddington to the vet

My cuddlebug, Paddington, is off to the vet tomorrow. He's my delightful 24-toed, cream-colored polydactyl cat (7 toes on each front paw, 5 on each back-- as evidenced in the photo). 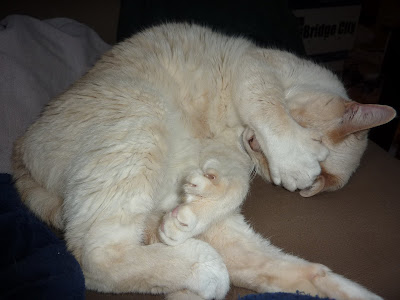 Seriously? The vet?
I'm worried and anxious about him. A year ago, he was overweight; almost 19 lbs. Now? I'm guessing he's around 12. Now, most of that weight loss was intentional. He was a BIIIIG boy. When we got him, he was so excited to have a supply of kibble that he ate himself nutty. We've been careful, and thus, the weightloss.

I was not happy about the limiting kibble nonsense.
But.

Now he's become a bit too thin. In March or April, he went to the vet, where he was diagnosed with having two bad teeth. The vet pushed on them and Pads shivered. I melted. My poor boy! BUT, we were at a boutique vet, who wanted WAY too much to pull them out (grr), but she also told us that it wasn't really necessary to pull them out since he doesn't really use them (yay).

However, in the past month, I've become more worried. His breath, aside from normal cat breath, has become pretty rancid, and I'm concerned that the bad tooth has become bad. And even if he doesn't use the tooth, I'm worried that it is hurting him, as a toothache hurts a human even when they aren't chewing.

So, I made an appointment. I'm glad I did; just now he was sitting in my lap. B gave the other two kitties and the dog a treat, so he gave one to me to give to Pads too. It was so heartbreaking. Pads popped the treat into his mouth, and then spat it out into my palm. He did this about three times, and then let out a sharp, sad yelp. He just couldn't eat the treat. It was too hard for him to divide, and too big for him to swallow. I immediately found something and broke it into pieces, but it must have hurt him badly, because he wouldn't even sniff it.

Now, he is not walking around in pain. He is our older man, so he does sleep for a hefty portion of the day. He's not wincing when you pet him (just if you poke him on the side of the mouth). He's the cuddlebug of the three cats. He will jump up to be with you and then find a place (often awkward for us humans to continue doing what we're doing) to sit and purr. And he has a purr that sounds like he's swallowed both a hummingbird (shrill sighs) and an outboard motor (you can hear the rattle from across the room).

So, he's content, but I think he's not comfortable. Thus, to the vet he goes. My poor boy. Fingers crossed the news is within the spectrum we expect, not a disastrous unforeseen diagnosis from left field.
Posted by Jessika at 8:56 PM