Here is the obligatory "before" photo of our stairs. Keep in mind this photo was taken in late April. We knew the stairs needed some help when we bought the house. We also found out later on from our neighbors that the old owners tried to cover up the bad paint as much as possible by painting in February right before the house went on the market. FAIL. We found the problem, dingbats. And spray-painting in February in Oregon in the rain is NEVER recommended. Continuing on...

So, by late September, the bubbles of paint had popped, paint had chipped, and the rotten portions of the boards in the corners of the planks were threatening to spread their rot to the railings.

Could we have waited? Yes... but the damage may have become worse, and we really didn't want to do that. 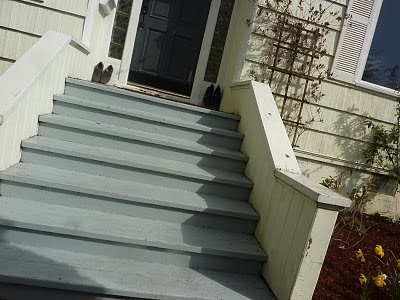 So, on Wednesday, when I was feeling particularly plucky and frustrated, I grabbed a crowbar (don't worry, Bob knew I was going to be doing this) and spent hours tearing up old planks. Those suckers were in well with 3.5" long nails with twists on them to stay in better. Oy. 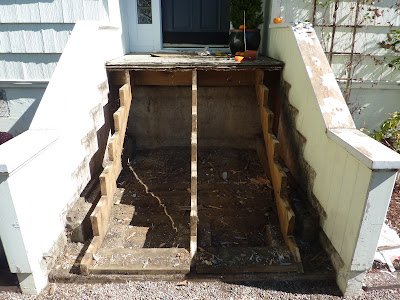 And the resulting pile of debris. 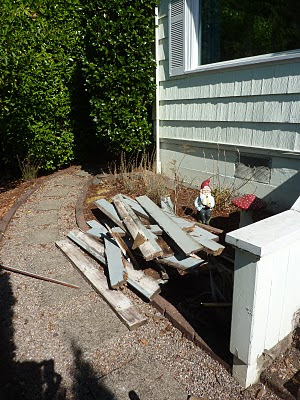 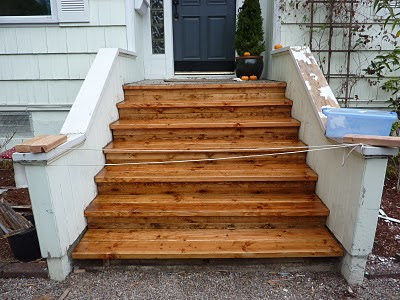 I originally spent $31 on a can of stain and then $8 on an additional can of seal. The gal at Home Depot though, told me entirely the wrong information on the stain, insisting that it would stain, seal, etc, and that for "extra" protection, I could also get a gallon of seal. I was happy because I wanted that color of stain (a teak color-- rare to find outdoor stain in colors other than cedar, redwood, or clear).

Well. The stain only stained. CRUD. And it wasn't the color I wanted. Double crud. And the extra seal was not compatible with the stain because one was water-based and one was oil-based. Super crud (and double crud on me for not checking something so obvious).

I managed to make the stain kinda work, in that I added a light brushing of some walnut stain (also oil-based) to the wood, and quickly wiped it off, darkening the teak stain. Ok great.

Then, I went to Home Depot. I wasn't expecting them to do anything for me, but I wanted them to know that they had given out wrong information. Shocker alert: They refunded me $31 for the can of stain AND $8 for the can of seal!!!! The fact that I was exhausted and looked like death warmed over may have helped. At that point, I had cut the boards, sanded them twice, and put two layers of stain on.

Then, in the paint department as the knowledgeable paint guy and I hunted around for oil-based, exterior gloss, he took pity on my exhaustion and gave me a $14 can of exterior gloss for free. WOW!

And that is how we got new front stairs. More to come later as we paint up the railings and everything... but that will have to wait as we're expecting rain. Yay plastic covering on to-be-painted surfaces!
Posted by Jessika at 11:27 AM