I finally rigged up my grow room in the laundry room. I took my bins off some of the shelves, rigged up the light, hung it, and plugged it in. I also put a board across the two slats so that I wouldn't worry about accidentally having a flat of starts fall through the cracks. 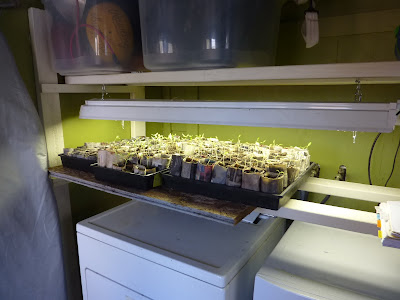 So far, I have two flats of tomatoes (so something like 70 tomato plants. oh oh....)-- there are 7 types of tomatoes. I also have one flat of ground cherries, gypsy peppers, and purple tomatillos. No germination yet from the ground cherry/gypsy peppers/purple tomatillo flat, but that's ok. I didn't have them in a sunny spot, and they could take up to two weeks to germinate (they were only planted earlier this week). Here's hoping. I have another seed packet of ground cherries to plant (yes, they're THAT GOOD), and I'm hoping to get my hands on some more gypsy pepper seeds. After they were features in the New York Times, there appears to have been a run on the seeds. Drat. Those peppers will supposedly grow well in our climate, whereas some of the others (more intense sun/heat lovin') won't. Grumble. Hm. 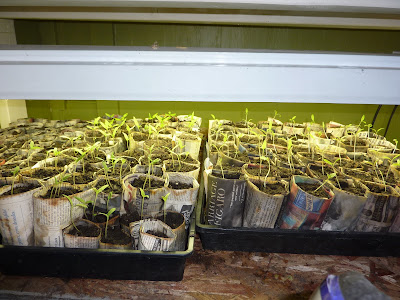 Anyway, here are a few more of my tomatoes. Excited. I planted 2 seeds per pot, and many pots had both come up. I decided to go for it and try to save the second seedling. I used tweezers and transplanted. As of today, it looks like there is success so far. Here's hoping. 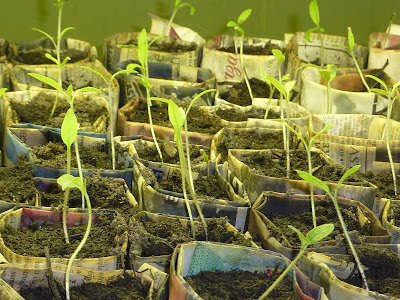 So, on to the unfortunate news. No, I won't be posting process photos on the blog, but today, I get to learn how to butcher a chicken. (insert gasps).

I have a chicken who decided it would be a "good idea" to fly up in the coop and come crashing back down. I found her on the bottom of the coop, leg badly broken and head badly bonked. I put her in a basket in the coop. She could see out through little holes, and no other chickens could pester her (I put a lid on the basket). I reexamined the leg yesterday, and she can't even bend it at the knee. It's swollen and something's definitely wrong. The poor girl has been laying on her side. She will eat, but it's at great effort.

Yesterday, I googled "how to butcher a chicken." Yes, I really did that. I had called my poultry butcher in town, but their next process is on Wednesday. Too long for that girl to suffer. The google turned up a blog post from a gal who recently did a bunch of chickens (graphic post), and randomness of randomness, she was in my town. Craziness. I emailed her, and she offered to come over, give a hand, and show me how it's done.

I am unnerved about this. Which, when you think about it, that's kind of selfish. I eat meat. I should not be divorced from the process whence meat comes from. Every time I eat a bit of chicken, this process occurred, and, often, to chickens that never saw the light of day or could run around. This chicken, though her life was shorter than I wanted, led a happy chicken life. Sigh. It's a bullet I need to bite. These are not pets, they're farm animals. Comical, hilarious, goofy farm animals. And she does look up at me with such sad eyes. SIGH.
Posted by Jessika at 9:45 AM