The yard, it is a-changin'

I spent the late afternoon/evening yesterday finishing building boxes (B helped with the final ones), and securing them to the ground. The backyard looks flat, but when you put a box down, you quickly realize the ground is not flat. There are bumps and dips.

This group has been settled in to be as even as possible. There's one big bump in the yard that I cannot fix, but it is not substantial, so I will live with it. 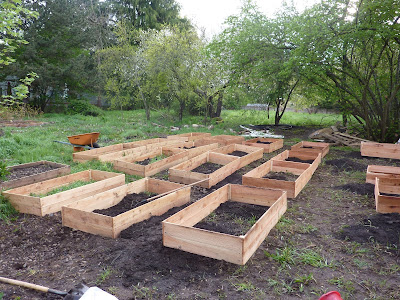 These have not yet been settled down. The 6 in the front will be all moved about 10 feet back to near where the two in the back are. And, they need to be nestled into the ground so they're somewhat level. 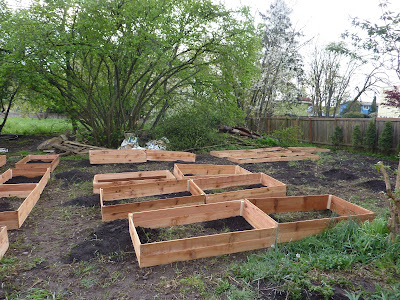 In the back, you can see my five lower boxes. These will be for things like onions, spinach, and basil; things that don't need the 12" deep boxes. I may add another box or two; there is easily enough space. 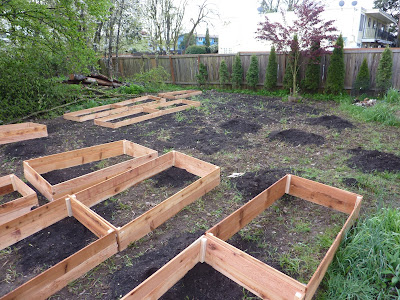 Closer up view of the lower boxes. 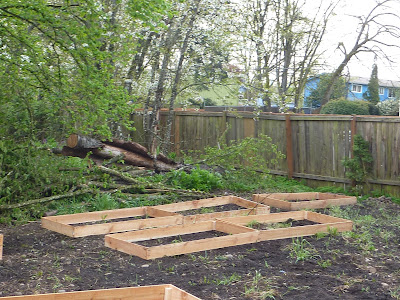 One of the tricky things has been plotting where boxes will go-- you have to factor in things like foot traffic and wheelbarrows and what plants will grow in the boxes and will they overflow the paths? etc etc.

I lined up the boxes so that the paths were pretty much straight. This will make watering and wheelbarrowing easy. It will also be more pleasant to the eye. You can't really tell, but this path lines up with the blackberries and then continues all the way down to where the raspberries are in the distance. 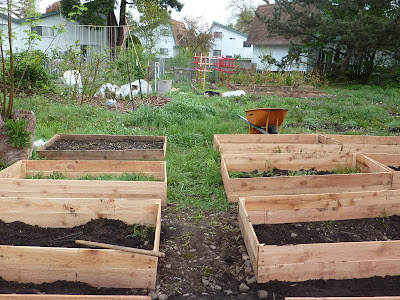 This is the back of the boxes, and this line also lines up with the end of the blueberry and raspberry boxes in the distance. While I am going to install another blueberry box at the end that will muss this up a little, I'll make sure to keep enough space so that the path continues. 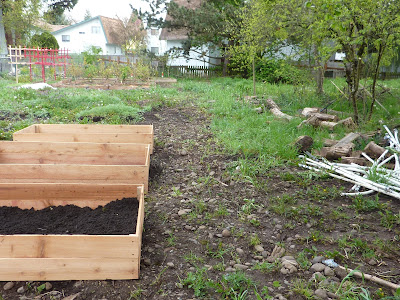 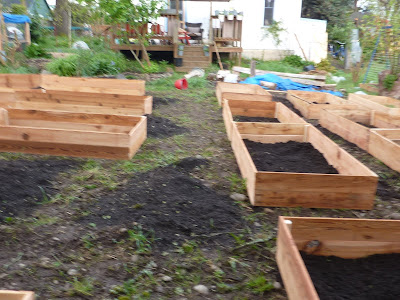 Then there's the path coming off the deck. This will be a larger path (no particular reason; just because it is nice), but it will be a straight-shot. The boxes on the left here will be lined up; those are the unsettled ones right now that haven't been nestled into the ground and leveled. 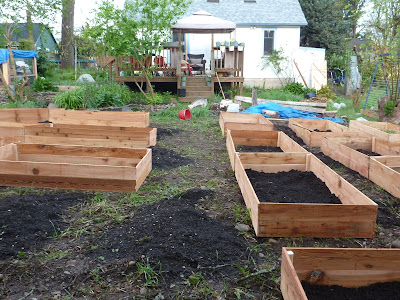 The line over to the small boxes isn't as linear, but I think that's ok because the small boxes LOOK different. So it doesn't look as funky monkey to have them a little offset. 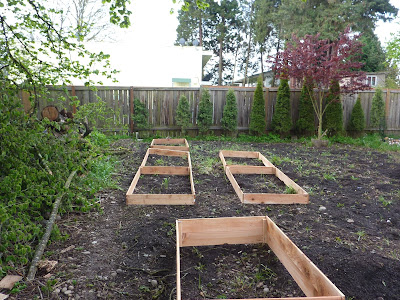 There is a pretty open space in the back corner. I'm pretty fine with this because there's a hazelnut/filbert tree in the back corner (above the coop) that shades a lot of this area in the afternoons. I plan on putting in a shed here maybe late summer, but it will be nice to have an open area too for parties and such; we won't be limited to the deck. :) 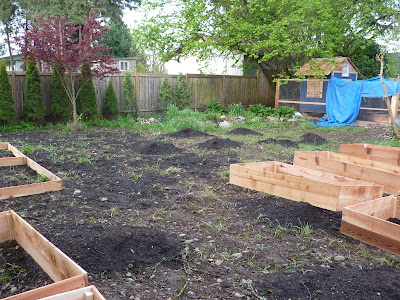 Besides the paths that I've already shown, there are also the interior paths between boxes. I kept these rather wide. I fear I made my blueberry/currant paths a bit close together. While this isn't a big problem, I do have to traverse that area much more carefully to make sure I don't snap any branches. So, I made all the paths wide enough to accommodate overflowing plants, watering, wheelbarrows, and foot traffic. 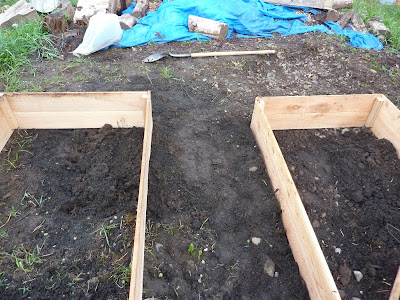 All the pathways will eventually be mulched to help cut down on weeds. We have two big piles of wood chips right now, but I suspect while the piles may look large, they won't actually go very far in coverage. But, the local soil/chip place has pretty darn good rates on mulch, so I'm not too worried. Believe me, it's worth it to me to not have to consistently yank weeds, especially in the rocky soil we have. There are areas where the weeds are so dense and thick that we may need to tarp those areas (thus killing the weeds) BEFORE we put down any mulch. The weeds are just too thick in those areas to be easily covered. Black plastic sheeting works wonders. Then again, so does a propane torch, but those (though fun) are more expensive.

My yard guy (who has a truck) comes this afternoon. Together, we'll be filling up wheelbarrow after wheelbarrow and filling these beds. I do somewhat feel like I'm a wuss for having him come over. But, by using his truck, we just drop soil off the truck into the wheelbarrows; gravity is on our side. If I had the soil place DELIVER the soil, I'd have to pay for the delivery and I'd have to lift UP the dirt into the wheelbarrows (since the dump it in a pile). Plus, it's not like I'm sitting inside eating bonbons while my yard guy works outside. FAR from it. I'm hoofing it and sweating right alongside him.

I'm pretty doggone excited about how this will all turn out. I think the photos I post on Monday will show a markedly different looking backyard. I also get to plant my potatoes and onions and peas this weekend, so much fun going on.
Posted by Jessika at 9:43 AM