The edamame were going crazy in the laundry room. Plus, with no overhead lighting on them (sun substitute), they were growing stalky, trying to reach for the sun coming through the window.

So, I painstakingly untangled them (losing a few in the process... but what else could be done??) and planted them in pots. Right now they are hardening out in the sun. My hope is to cover them tonight and then place them tomorrow afternoon in a makeshift plastic hot house (leftover from a previous tenant). 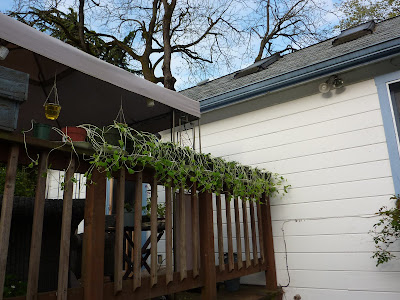 I realize I'm risking a bit by putting them outside. The high today will be 63, but it's currently 45 outside. Erg. I hope they're ok, as the sun is directly shining on them. Now I know for next year: Edamame CAN grow here, and they grow fast. Wait till May/early June, and plant them outside. This was one of my experiment crops this year, so -- something learned, right? 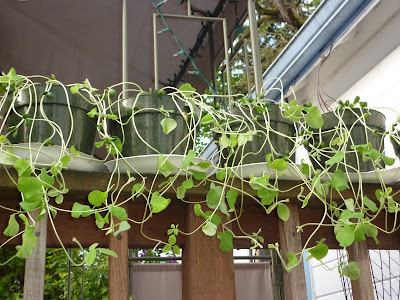 In other news, I finished buying my carrots and parsnips yesterday. They, and my parsley root, need to go in asap. Now that the rain has stopped (for now), I can put plastic over my basil and spinach too, which will hopefully warm them up and promote sprouting.

I will tackle the laundry room tonight-- I need to rework some thing so that I have lamps on my tomatoes and peppers. Two flats of tomatoes did very well in germination. I have a third flat that was planted 3 days ago. It has peppers, ground cherries and tomatillos in there, but no germination yet. The ground cherries could take as long as 2 weeks to germinate. GEEZ. Stuck under a bin on top the washer... I doubt I'm highly promoting germination. So, I'll have to rework some things and get some light on everyone. I also want to fill my tomatoes with some more soil so that their long little stems are more covered, and hopefully, they'll form roots where they're covered, making the entire seedling stronger. I hope, at least.

I've also figured out how I'm going to manage my beans and my sweet potatoes. Did you know sweet potatoes can grow vines of up to 20'!? AND, you shouldn't really let them touch the ground because they could root where they touch. Geez. I'll work on that project this weekend and will let you know how that goes. 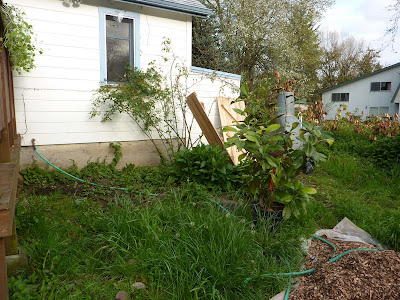 Uck, that's where the fireplace area is going to go. I wanted to take a photo so there's at least documentation of a "before." My thoughts on the "after" is a large, flat (it's pretty sloped right now) area with a barrier to the path on the right, flowers (love lies bleeding-- so cool) by the rose against the house, and terrace that rose over the area. We'll see.
Posted by Jessika at 8:51 AM