Chicken in the bathroom

This morning, there was a chicken in my bathroom. 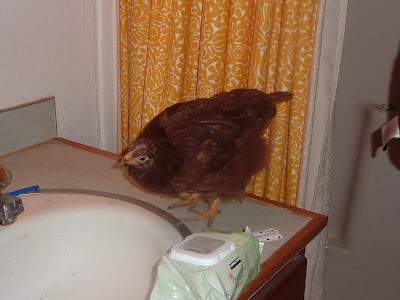 Yes, that's the baby-- the red girl that is about 1/3 smaller than the rest of the red girls. Some of the others just tower over her. Clearly, she was at the bottom of the flock. She'd be the one bumped to the other perch at night or the one forced to sleep under the perch. I was ok with this type of pecking order-- at least they weren't pecking. I figured if I ever saw anything mean, then she'd go out to be with the babies in the back.

And then, I went out there this morning. 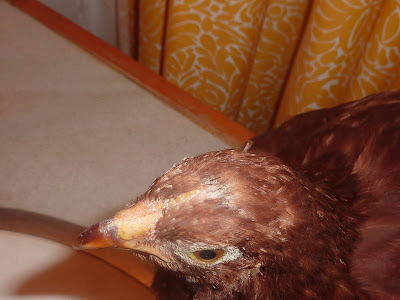 Yup, that's a bald spot on her head. It's new. I know this because every morning she is the last out of the coop and she comes and hangs out with me. No bald spot yesterday. Today, bald spot. Dang it.

So I immediately took her away from the mean red birds before anything else happened. But, unfortunately, I had not yet prepared the food for the babies out back. Since our house is 100% open, except for the bathroom (and the laundry room, outside, where I didn't feel like going), she got stuck in the bathroom for about 5 minutes. 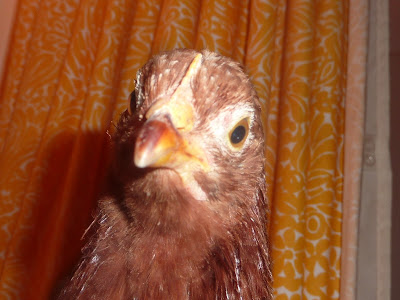 I think she rather enjoyed herself. 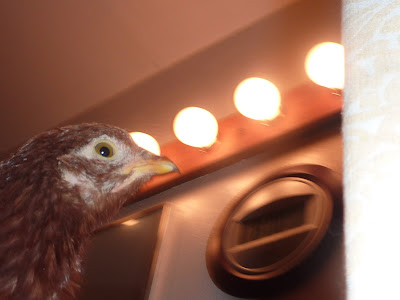 I wanted to wait until the food was ready, that way the babies would associate good things with this new bird. "Hey, there's a new hen, and she brought food!"

So, when all was ready, I picked her up. She immediately snugged up against me. Yes, I do all this in the mornings in my bathrobe. Don't worry, I have clothes on underneath. 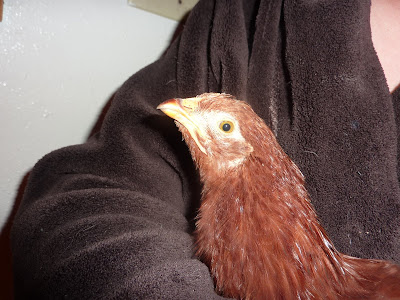 When I got there, I put the food in and then plopped her in. Really, the best time to introduce is at dusk, but I really think/hope it will be ok, especially since in the babies' coop, she's almost the largest bird. 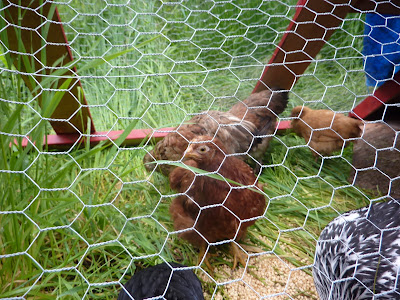 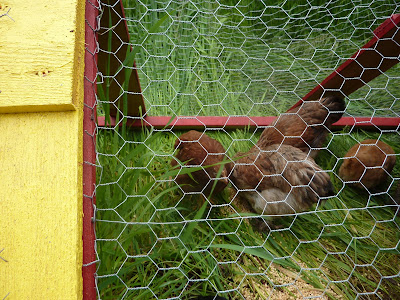 A few minutes after these photos, the one wyandotte (whom I suspect is a rooster, based on growth rate, bulliness, and comb growth) challenged her. She held her own. The dark brahma challenged her a few minutes later, and she held her own. I suspect there may be a few lost feathers as the sort out their pecking order here, but I know she'll be higher up and better treated out back with the babies.

I think there are about 3 mean red birds. That leaves 4 normal-sized red birds and one baby red bird and the barred rock in the big pen right now. If I swap out the 3 meanies for the babies, we could have happy little chicken kingdoms.
Posted by Jessika at 9:50 AM