Pig & Potatoes (and some new plants)

Mr. Pig did not have a good day yesterday. 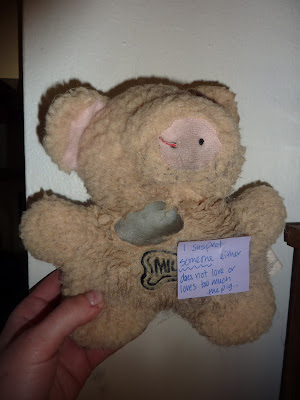 Yes. She ripped out his squeaker. She did not want to eat the squeaker, she just wanted it GONE. And the hole from the squeaker removal surgery provided ready access to... STUFFING (aka the joy of dog joys).

In other news (and not as violent), I have hilled one bed of potatoes. I first mixed up a nice batch of 50% coffee chaff and 50% good soil. This made for a very light and not-too-nitrogen-based mixture. I put this all up and around and over the plants, about 2-3" deep. Then, I covered that with some soil (mostly to help keep the stuff beneath it in place), so about another 1". Then, I covered about 3-4" in straw. I'll continue using straw if another hilling is needed (most likely). 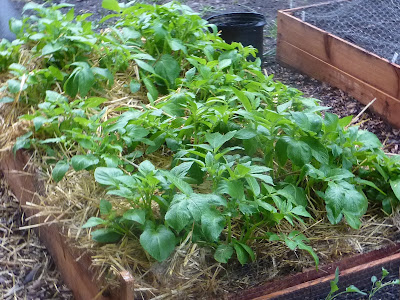 You can use a variety of things to hill/mound, but this worked for me. The potatoes were about 3" from the top of the bed, and I went over the top of the beds a bit. So, I may have to add some additional side-support to the bed if I need to do a second hilling. 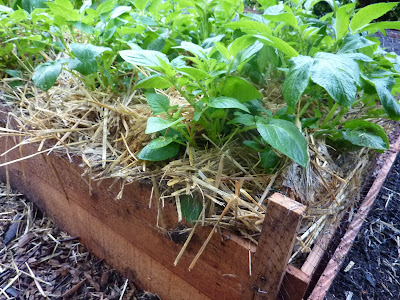 The fingerling beds only received the chaff/soil mixture. Some of them are still a bit too small, so I am giving them a few days before I continue my efforts. 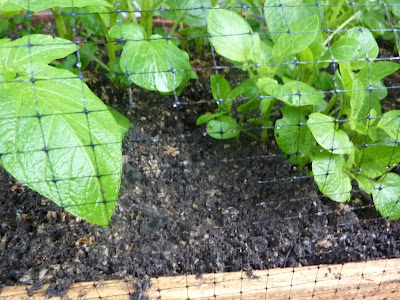 Our garden is also home to two newbies: Two rhubarbs! I'm a bit concerned because they should have been moved earlier in the year. But, you have to get them when the craigslist ad appears, right? Hopefully, these two beauties will love their new home and send out shoots all summer. If not, hopefully they'll produce next year. 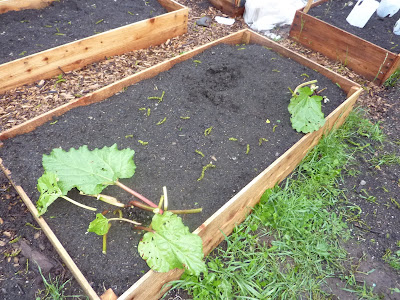 The woman I got them from had hacked off many of their new shoots. Whether that was the right thing to do is not important, for that's how I got my plants. The nice thing is though, that these plants are not babies. They're about 4 year-old adults. Rhubarb won't produce until about year 3, so I'm hopping on the rhubarb wagon without any unnecessary waiting. 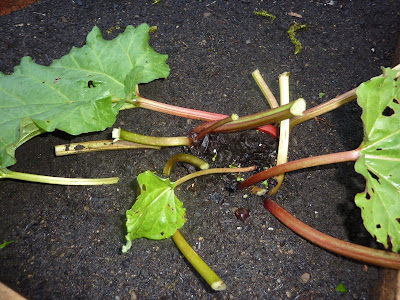 The plastic is working well for my greens. Here are my mesclun mix sprouts. I only planted these late last week, so this is exciting. 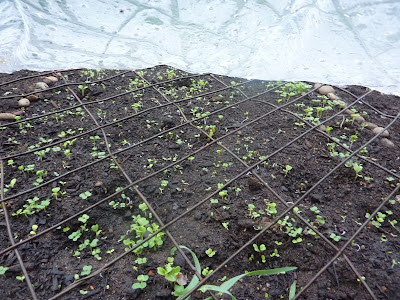 I only planted my buttercrunch on Tuesday, but look at them! Looks like I will have some yummy thinning to do! 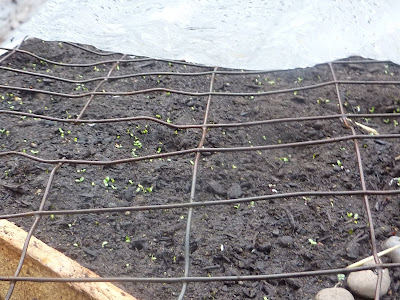 My arugula is pretty much amazing me. I planted it on Tuesday, and I had sprouts Wednesday afternoon. I think this is because I was an idiot and left the packet outside (where it got wet and the seeds got damp). The seeds were stuck to the inside of the packet, so I was only able to use about 70% of them. But apparently, those 70% are happy seeds. 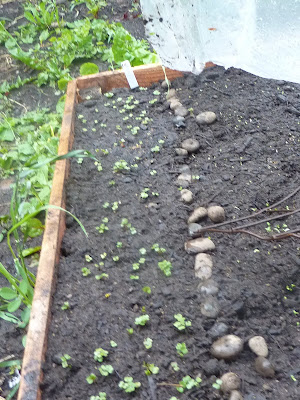 On Wednesday, I planted my carrots. I planted mokum carrots from Territorial, carrots that form bulbs like beets (instead of long roots), a mix of purple, yellow and red carrots, and red carrots. Carrots often take a long time to germinate-- up to 20 days-- so I have to be pretty patient with these. 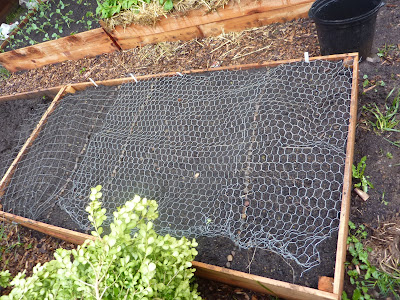 You'll notice from all the above that we still have not fenced in the yard. We are going to use deer netting (cheap, but will do the trick). But, the weather has been MISERABLE.

And, unfortunately, here is our forecast:

BLAH! I mean, my peas will LOVE it, but I will not. My tomatoes will not be going in the ground until June, it looks like. I think it will try to plant my beans indoors or in the cold frame. I wanted to direct sow, but hm. My squash will be started in the cold frame too, it looks like. It's not SO much the temperature (though the lows overnight are in the 40s), it's moreso the pelting rain possibly squashing the seedlings or drowning them away.

Luckily, all the other plants seem to enjoy the rain, so this is good. But it makes it difficult to do anythign outside when you're consistently covered in muck.