A neighbor (from like 5 houses over; I'd never met her) came up to me yesterday and asked if I'd lost a chick. She was holding a have-a-heart trap where she had placed a poor, approximately 5-week old chick. The little bird was friendly, but I guess she felt a trap was necessary so she didn't lose her. Having only black speckled chicks, I told her no, but then she asked if I could care for her. If the proper owner was found, then I'd obviously give the chick back. If not, then, well, I'd have a new chick!

I have no idea what type of chicken it is. Maybe a feathered black australorp? It looks a little freaky and intense. Last night, it escaped it's quarantine box in the laundry room, and I thought I'd lost her. Then, I looked up. There, perched on top the highest shelf, quietly glaring down at me, was this chick. Needless to say, the screen on top the box is now very much securely on. 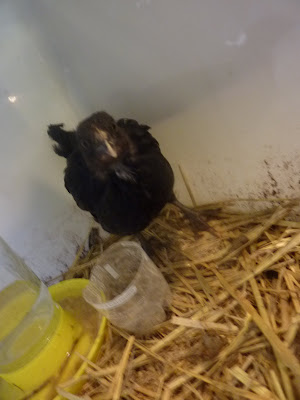 In other news, I've been on the hunt for a wood outdoor set. Problem? They're super crazy expensive. That's not something we're willing to spend a ton of cash on. Soooo....

Last weekend, when I was at the recycling place, I spotted these chairs. Now, they MAY be a tad ugly now, but stay with me as I describe my plans for them. And yes, the pergola is not done yet. It's been a bit unseasonably cold and wet. And yes, that's my awesome new fire pit I found on craigslist. For super super cheap. Total steal of a find. 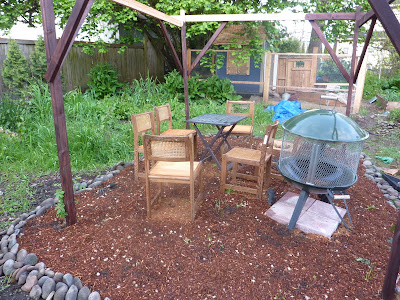 Ok, so here's the chair. Note that it's solid wood. The various portions of the chair are also removable. the seat can come off, as can the back. I wanted chairs in the upright position, that way we could use the set for just hanging out AND for eating. It's hard to eat at a table when you're sitting in a lounger Adirondack chair. And, while I know I possess the knowledge to build my own chairs, I really don't have the complete set of tools or the time to do so. 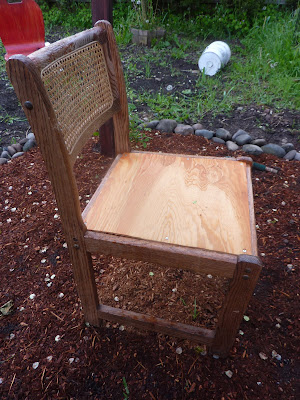 So... imagine with me the following: remove the back rest on the above chair. Remove the seat portion. You're left with a bare frame, one that I can easily sand down so I can stain it all one uniform color. Now, put slats on the entire chair, a la the chair below: 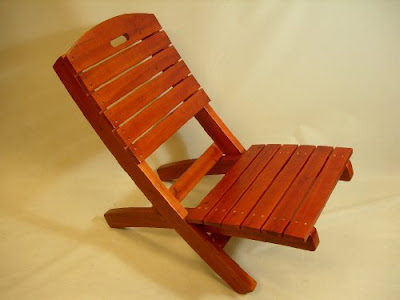 And, imagine the entire chair with mahogany stain (the same color that the pergola happens to be stained). 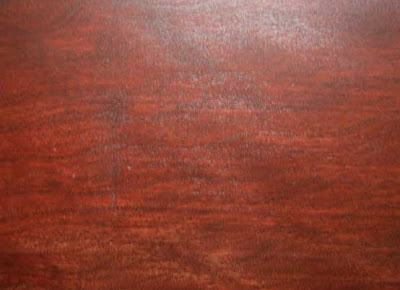 Finally, one last detail. I picked up these awesome travertine tiles (they're approximately 1"x1" each). To jazz up the slats, I bought a chisel. So, a few seat slats will have inlaid tile on the ends, and I'm thinking that one of the slats on the back will have like three, centered in a row tiles. The color of the tile against the stain on the wood should look really pretty.

Here's a sample one I did. You can't really tell the final product because the wood is not stained, but you get the idea.

That's my project that's on the back burner right now. First up: covering all my plants, keeping the weeds down, and planting a few more seeds.

I should also note that I currently lack a table. As a result (and being unable to likely find a table that will match this style of chair), I'm currently examining a lot of different tables. I know how to make a table, but... I want to be careful and make one that is well-made and not rickety. I've found my best projects and designs come from careful examination of other tables. So, here's hoping!
Posted by Jessika at 9:23 AM