So as you may have seen in a post from late April, our yard was being invaded... by tall tall, thick, clumpy, hard-to-get-rid-of, grass. 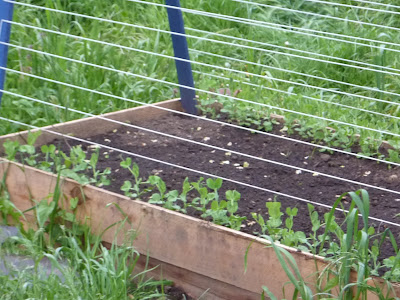 We aren't allowed to use pesticides in our backyard (organic only per the landlord). While I like this, it does get a bit grumbly when the grass invades.

So, we had it weedwacked down on Sunday, which made me SOOO incredibly happy. 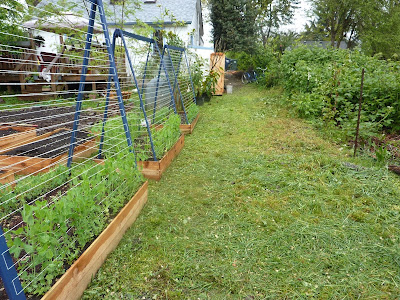 But, once grass is weedwacked, it grows back with amazing speed. The best analogy I have is trimming your fingernails. The first week after you trim them? Growth spurt on nails. That's how it is with darn grass too.

But, mulch is crazy expensive at the place I like to go to. Like $20 per cubic yard. So, I found out where the city puts its mulch. Lo and behold, there's a massive pile, free for the taking, near where I live! We got about 2 cubic yards on Sunday, and yesterday, in the middle of practically a monsoon (it was dumping rain like crazy!!!), I spread out the first batch. I laid newspaper down first, but I may not do that for the entire areas I need mulch. I want to, but I'll have to find a source of newspaper; you go through a lot!

Anyway, here's the resulting look, so far (this is the 2 cu. yds spread out):
I think it looks a bit piece mail right now since the yard isn't finished with this coverage. But you have to imagine this in between all the boxes and whatnot. The area under hte pergola is a different color of mulch, and we're thinking about surrounding the pergola with a little bit of grass to provide some color and greenery. We can't afford to grass the entire yard (rental...).

I think in some areas we will put some paver stones and fun things IN the mulch to provide little paths and some extra pops of color and dimension. But really, once I envision this EVERYWHERE in the yard, it becomes much more prettily uniform.

On another note: The landlord is coming down to visit my (bungalow)neighbor on Thursday. He changed roommates, so the landlord has to do a deposit walk through. Anyway, it's the first time the LL is down since we moved in. When we moved in, the yard was full of garbage and clumpy grass. I hope the changes are met with approval. They know we are doing lots in the yard, but there's a difference between emails and seeing it.
Posted by Jessika at 9:25 AM