After a wonderful year last year in our yard, we're trying to simplify things now. We are on the lookout for a house, but we're in no big hurry. So, we can wait around for the right one to come along. However, we don't know when that will be. It could be tomorrow, it could be next year. So, we decided we needed to simplify our backyard. When the right house comes along, we figure we'll be up to our eyebrows in other things, and the easier the move, the less stress on us and the more likely we'll get deposits back.

This has forced us to review what we have going on in the yard. Obviously, we still want a garden. But, how heartbreaking would it be to suddenly lose all our vegetables and hard work if we found a house in June? We'd be forced to move out and abandon a flourishing garden in the backyard.

We're specifically looking at a 20x30 community garden plot, but that's not a guarantee because those are done on a lottery system. So, if we don't get one of those, we'll hopefully be gardening in the shared back lot with our neighbors, Vince and Joe. That way, at least we know the garden will go to good use. We can even come back and help them if we do end up moving. We'll know about the community garden in the next month or two, which will give us plenty of time to determine our next steps.

On cutting ties to the property, we've been doing a lot of work.

First off, and the biggest one, the chicken coop was sold: 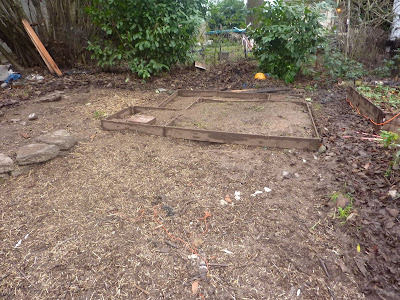 I know. GASP! The coop! You only finished that in March!!! Sigh, yes, I know. But I do still have chickens-- four of them. So, while I feel like I've parted with a chapter of my life, I know it's ok. And honestly, the stress of "how to handle the coop" was greater than the stress of selling the chickens. The coop represented a $200 deposit, the chickens represented approximately $80, and the coop itself $300. If we waited until we moved, we'd be looking at substantially less because we'd have to either leave things behind (forfeiting the deposit and coop-- we wouldn't leave behind chickens) or selling things in a low-price firesale. Not great. So now, it is sad and vacant, but at least that's taken care of!

Next, I put an ad on Craiglist for plastic pots and plant trays. The area behind the chicken coop had become a "stick it" spot for all such things. Bleh. YUCK. But, for FREE, I got several interested folks, and, yesterday, a girl came and picked up everything. I kept a few big white buckets, that way I could someday easily transport the blueberries, but that's it. And the area, while still needing a few things cleaned up, looks much nicer (the red thing was there when we moved in, don't know what the hey it is). 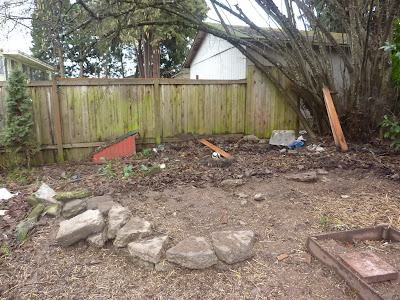 We've been going through our home and yard and trying to determine what needs to go and what needs to stay. I'm happy to say that we're getting pretty close to being done with needing to sell things. We don't want to move "extra" stuff someday, and if that's the case, why are we hanging onto things?

In the yard there are other things to do too. We need to trim the raspberries, weed them, and rebuild their trellis. While cute, I learned a lot about trellis-making this past year, especially: Sturdiness. I built this trellis using furring strips, which do not do well when being nailed together. They split. So, this trellis was not too sturdy to begin with. After a full year? It's suffered. I plan on just putting up four posts on each box, and then stringing wire or twine between them. Done. What a mess right now though, right? 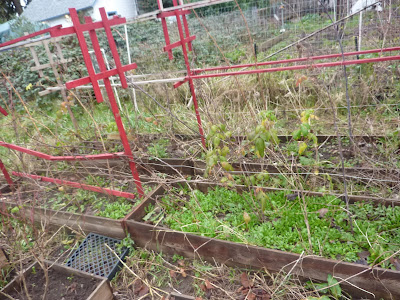 B was wonderful this weekend and weeded the blueberries. I hope they come back in full next summer. They worry me with their winter dormancy. They had a rough time last summer and fall, and I hope they're ok. We will see. 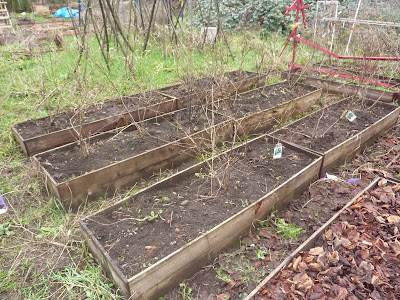 In the garlic beds, one type of garlic has sprung to life: red janice. Must be an early garlic because none of the other garlics (which is typical) are sprouting. 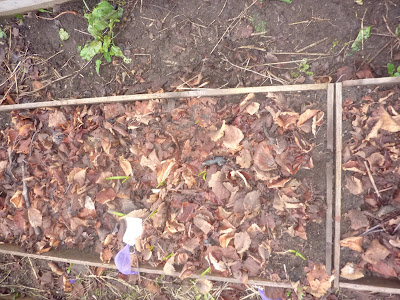 I also sold my currants. I did some hard thinking and decided that while the currants were nifty, I much preferred blueberries and raspberries. so, we sold the currants. this gives us some extra garden space too. 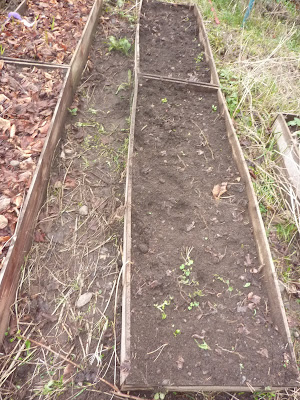 Whew, right? But I feel much lighter. I'll feel even better when the rest of the yard is clean too.
Posted by Jessika at 9:14 AM