So at long last I'm posting a picture of the centerpiece. Well, of one of them (there will be 15). This didn't take the shortest time to make (there are something like 200 paper roses on there!), but I love how it turned out. 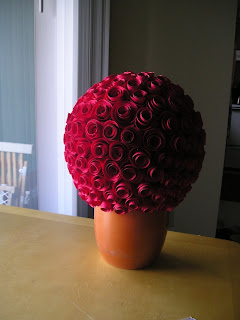 I wanted them to be all pretty much uniform, and so the question became: HOW? I bought a package of balloons, and then I flour/water paper mached the balloons. I figure, that way the shape will be approximately the same for all of them. That dried, then I painted the mache red so that any of it that showed through would be red (thus not noticeable) and not newspaper-y. Then I glued on the roses. I made a stencil for the roses, so that way they're all about the same size. What's great is that they all LOOK different because they're individually made and rolled. I like that they're tightly clustered.

B learned how to make these too. He was helping me. SO CUTE! Gosh I love him.