Here is my rudimentary new home for a chicken with a hurt leg. She's limping (video below). I think it's just twisted or sprained. The box is pretty small, but that's what I want. I don't want her using the leg too much. She was able to put both feet down last night (an improvement), but she still limps. 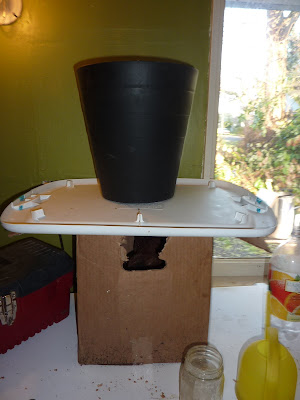 The box has a pretty big hole in the front to let in some light. I think she REALLY likes it in there. A ton of food and water, cushy bedding, and no loud sisters (except the cheeping of the babies also in the laundry room in their bin). 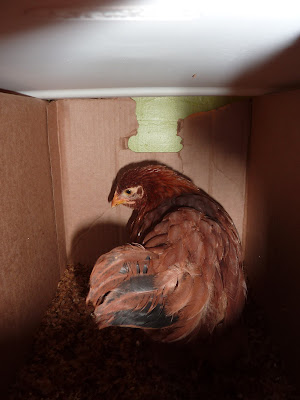 She hasn't tried to escape the box, even when I have the lid and trash can off of the top. I keep those on when I'm not around.... I don't want her deciding to explore and then have her eat all my seedlings in the laundry room. And, I don't want her hurting herself more. 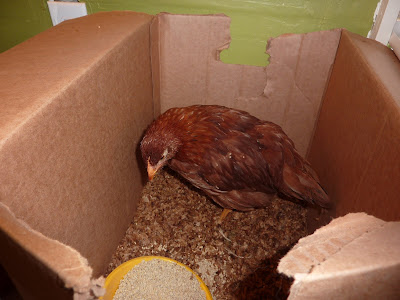 She is really very sweet and very docile. I think (in her small chicken brain) that she knows I'm helping her. Sigh. I hope she does better soon.


In other news, this afternoon begins a raised-bed-making frenzy. I've decided to purchase dirt and fill the beds directly up. Half my garden doesn't need much in the way of raised beds, but the other half... well, the dirt is so riddled with rocks that it takes me an hour to fill a 3'x6'x12" bed. At least an hour. I want my plants to be happy and healthy, so I've decided to buy some dirt. My yard guy is coming over on Sunday, and we're using his truck. We'll take wheelbarrow loads off the truck and dump them directly into the prepared beds (thus: I need to BUILD them).

Yes, it's an expense. But, the beds need to be done. I can do in one day what would take me probably 80+ hours. That's worth some expense. Plus, the dirt is REALLY good, nutritious dirt, meaning I'll hopefully have really healthy plants. If we stay there until at least next summer, it's also more justified. We crunched the numbers, and this is a good idea.

The rototilling wasn't for nothing; it got an area that has softer, less rocky, dirt, and that's helpful. Plus, it did tear up the ground somewhat. So, the plants with deep root systems can more easily penetrate through the good, purchased dirt into the natural dirt below.

I'm happy that as of Sunday, I'll have a backyard that looks much more put-together. And, I'll have time to work on things other than digging, shoveling, filling, and weeding out rocks in raised beds.
Posted by Jessika at 9:31 AM