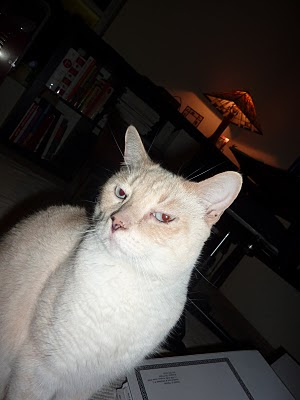 I realize that by writing this, I sound grumpy. Can one still request happiness from people and then complain when it's not received?

Regardless of that debate, I'm about up to *here* with our neighbor, and there is diddily squat I can do about it. Yesterday? The woman had the audacity to tell me she keeps stepping in our dog's crap.

Let me explain this: There is no way in hell she is stepping in our dog's crap.

First of all, she claims it's by her car. We NEVER GO NEAR HER CAR. Why? Because she's crazy. You don't go near crazy people's stuff.

Secondly? We never let our dogs out in the front yard without a leash, or (in Maddie's case, and rarely then) without us five feet away. And again, we're NOT NEAR HER CAR.

After this confrontation (which, may I add, occurred while I was trying to get my escaped cat out of her yard so he wouldn't poo in it. Instead of her saying "thank you for not having neighborhood pooing cats," she snidely says "well, I step in dog poo anyway." UGH!), I went inside, with said cat. I pondered for a bit, and then decided I needed to do something that was proactive, a neighborly gesture, and something I can tell the landlord I did if she ever wants to complain.

I went back over there, and said "You know, we keep a really close eye on our dogs. We've lived next to people who have not, and we don't want to be those people. If you ever see any droppings you think might be our dogs', please let us know and we'll pick it up. Given that we don't let our dogs out unattended, and we always have dropping bags on ourselves, I can nearly guarantee you that it's not us, but I don't want to get into that argument of 'it's not my dogs' poo.' I'd rather have a happy neighbor."

To that? She replies: "I can't go show you because usually, I find it by stepping in it."

The rest of the conversation is not worthy of repeating. She was just trying to be accusatory. I mean, geez, our dogs DON'T EVEN BARK.

Of course, this is also the woman who got mad at me for rolling my garbage can past her house in the late morning hours. Quietly. Apparently it will take bags of cotton wrapped around objects so I can carefully not disturb her. And no, I was not playing loud grunge music and singing while simultaneously clanging a pan and rolling the garbage bin. It was just ONE garbage bin.

Meanwhile, she gets in fistfights with her daughters in the rain and mud in the front driveway, screaming matches with people smashing patio tables with hoes, constantly blocks the driveway, and her daughter has a drum set. And, while we were talking, the daughter stomped up and slammed the door in our face. The mom tried to say "well, she was cold." I bit my tongue to keep from saying the things my mother would have done to me if I had slammed a door like that, and even moreso if it had been in people's faces.

I should also add that while fifty million stray cats walk through our yards, she insists that "the cats don't poo here." Right. I've found poo everywhere in my front yard from the cats, but of course, your area is the magical non-cat poo grounds. Please let me know what you're doing so I can start doing it, ok? Unless the cats stay away from overall bad vibes. I don't want to sacrifice my generally positive disposition. Moving on....

I think I stood my ground, but in a friendly, "look, I really don't want an argument. We're doing everything we can to keep our dogs from being a nuisance to you. Just know that" sort of way.

That said, I came to the following conclusion (one I generally have after interactions with the grumpy folk-type of people): Leave her ALONE.

I think this means keeping the escapee cat indoors at all costs. And avoid eye contact.

Some people are bound to be miserable, whether through external factors or through their OWN DOING.
Posted by Jessika at 7:41 AM