Photos of the pages!

I've hacked away a chunk of my project, and I've decided to post some results.
November: I was still working with the photos from the old album, so I had to somehow make photos that were cut without a straight-edge work. I think it worked out pretty well. 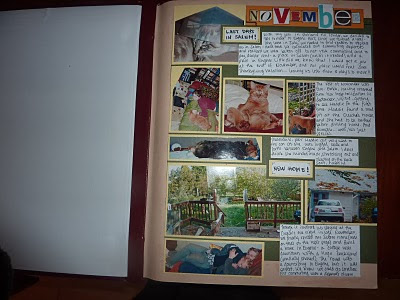 Interestingly enough, I used to not order that many photos for the album because the old album lacked space. So, I went back and ordered some more photos, that way I can insert another page on our Vegas trip right in here. Yes, I ordered two pages worth of photos. 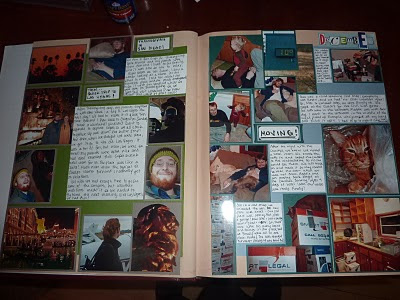 December: I was still dealing with the old photos. These are also pages I had to redo in order to give more room in the margins for the pages to flip. The things you learn....
I wish we had more photos from December, but it was such a chaotic month with us moving. Some photos are definitely better than no photos! 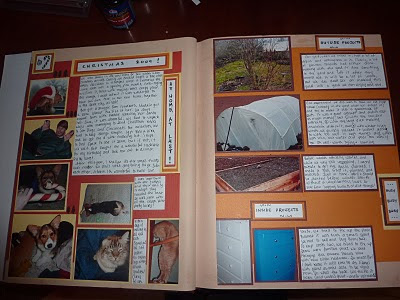 January: The last of the curvy-edge photos. I'm sort of figuring out how I want to lay things out in January-March. Note that these are also pages I had to go back and redo in order to give more room in the margins for page flipping. 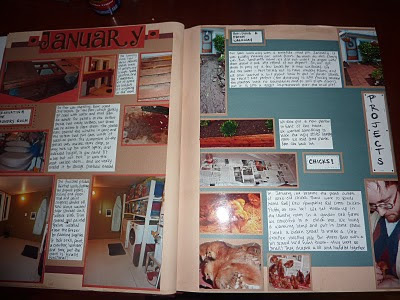 February: Feb only had a few pages of partial photos. Thank goodness. The last of piecing together oddly-cut photos and trying to piece together photos into categories. Things got easier (although the number of photos grew) after this month. 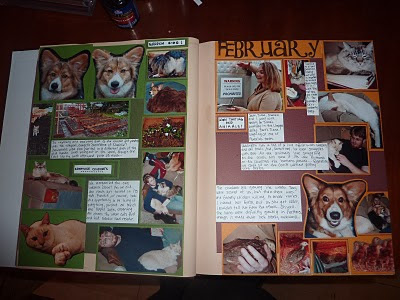 March: The beginning of straight edges. This page for March was actually the first page I did in this new album. I did have to redo it in order for the margins to work, but I don't think I did too bad. I loved this look so much that I decided to buy my paper cutter after this. 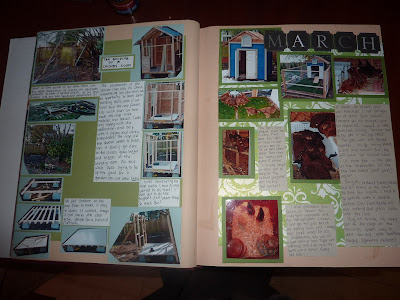 I decided I'm not a huge fan of design backgrounds. The lines taught me this. But sticking to mostly solid colors ends up being cheaper anyway!
This right-hand page is also the start of me using categories and labels. See the little block that says "Maddie Days"?? That's the first one. It really emphasized me categorizing things in the months to come,which resulted in a much better overall flow. 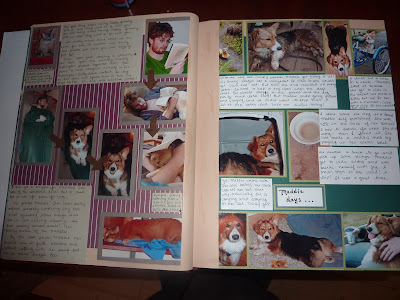 This green page (below) is the last of me having to cut for margins. Thank goodness.
April: April is technically the first month where I used my magazine letters for month titles. I'm still trying to think of a way to get the letters to pop a bit more. I think buying a sharpie and better making it a block might help. Or backing in something I don't normally use: Black paper. 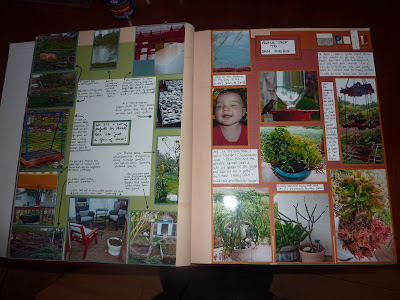 I also became aware in April that a little extra planning could result in having page spreads. Here (below), I wanted to have two garden pages for April. By spacing it out, I was able to plan to have them both be visible on one page opening. I also realized that I don't always need a ton of captions-- see, on the right-hand side? Only some labels and a tiny caption. 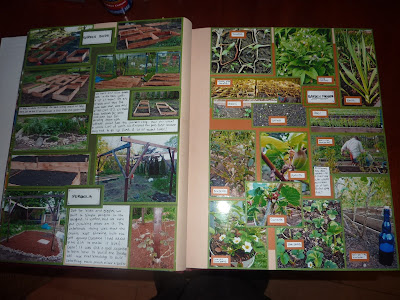 Regardless of the amount of planning, there will always be photos that I randomly put together. I hadn't planned on including the weird birds, but I did want to include the new chickens. So, I put them together. But, with labels, it wasn't quite as mish-moshed, I don't think. 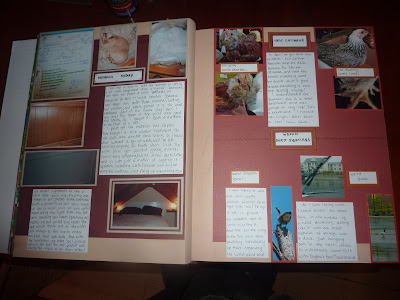 I'm really beginning to experiment with layouts more in these pages. 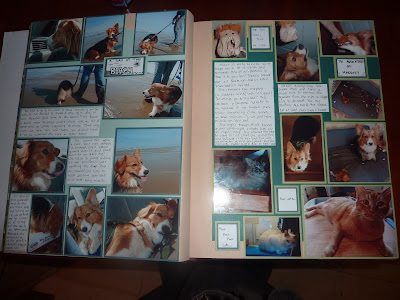 May: A long month, but good for practice. 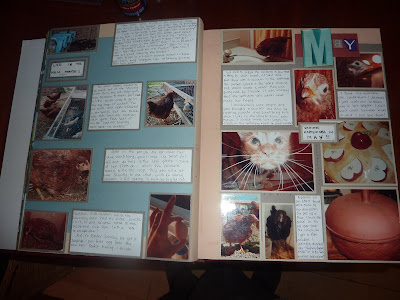 I cut this month out in advance of sorting. Now, I more sort the photos, decide the layout for each page, and then cut. You see more of the pre-planning in June. 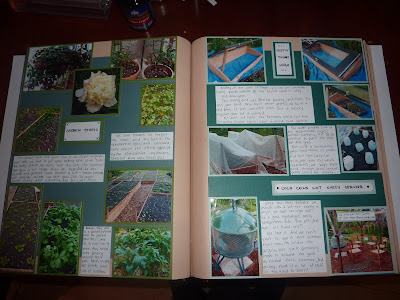 But what a difference sorting into categories makes! 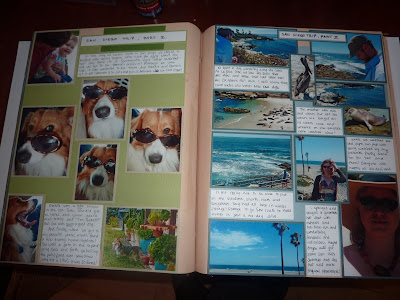 I had to leave "San Diego Trip, Part IV" blank because I'm getting photos from my dad. Yes, I planned it out-- one page worth's only. 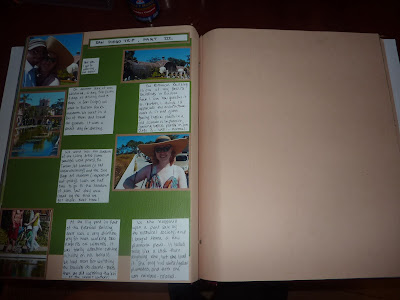 I began in May to also insert small pictures occasionally to fill in some blank space. See the orange pictures on the right-hand side? Not great, but it does expand my ideas for things to use. 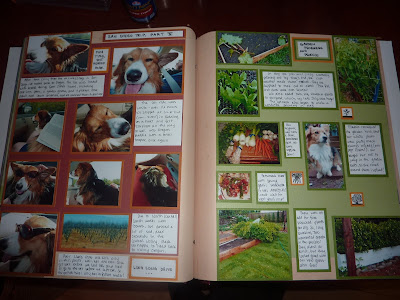 June: Finally, on to June. I really like using these song lyrics as categories on the first page of June (right-hand page, below). 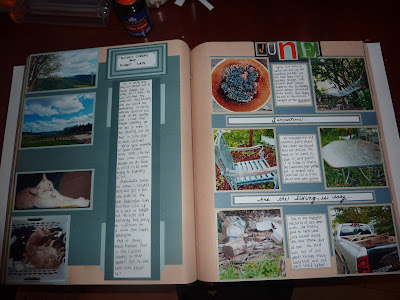 An excellent example of planning a page spread and planning my photo cuts. I also love how all these little photos kind of look like seed packets. Interesting note: I actually did all of the left-hand page and then outlined each photo/caption in black ink. Result? I HATED it. But, the right-hand page was yet-to-be-done, and I wanted them both to be in the same style. So, I re-did the left-hand page to have no black ink. I had to be pretty creative in paper usage, since I didn't have much paper left at this point. But, it worked. And now, I have two alike pages with no black ink outline. 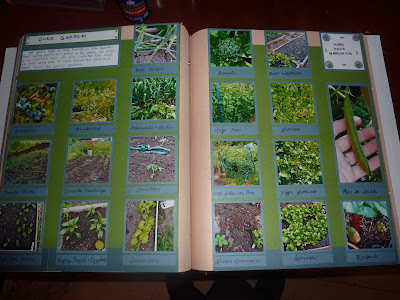 I had some turf and chips photos I wanted to insert, so I decided to make an entire page. But it was a bit empty, so I decided to add in these little flower drawings. I think it worked out well. 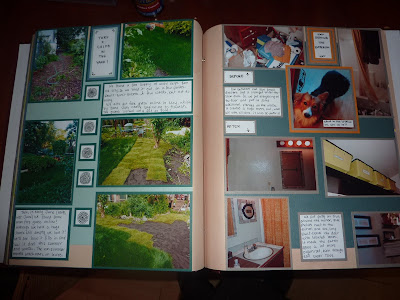 One of my favorite pages: The chicken page. I love those orange drawings and the title boxes across the page. I really like how this page turned out. 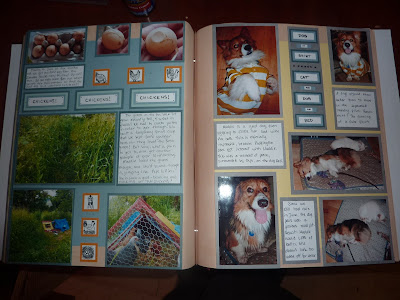 So, that's it so far! July and October have been ordered, as well as the additional Vegas photos. Until they arrive, I get a little bit of a break.
Posted by Jessika at 9:19 AM