Bailey did NOT like his crate the first night he was here with us.

And really, "new dog" as an excuse for being tired does not fly with the bosses super well. Plus, Bailey was sleeping during the day (see below), and this was not encouraging him to sleep, in his crate, at night. 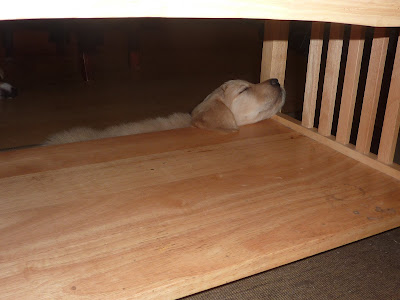 So, we bought a big giant bear. Yes, thrift store, but hey, this was a project on a whim. Plus, it was store surplus (and thus, BRAND NEW), and it was only $6. For a giant bear. Plus, I didn't know if it'd work out.

First to do: Cut the bear's eyes out. 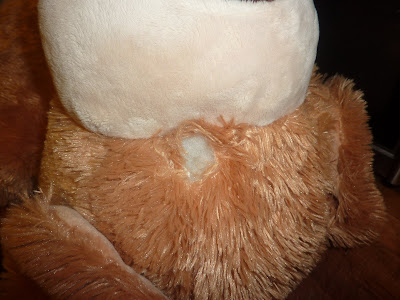 I was worried that Bailey or Maddie would chew the bear and choke on the eyes. So, the bear became eyeless. 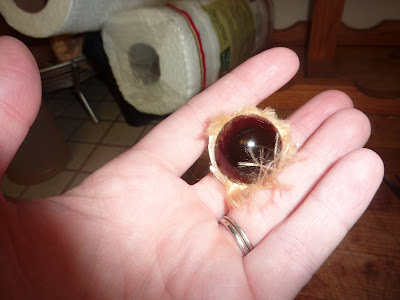 Don't worry, I sewed up the holes. Maddie can sense easy unstuffing ability from a mile away, so if I had left those holes unsewed, the bear would have been unstuffed quickly. 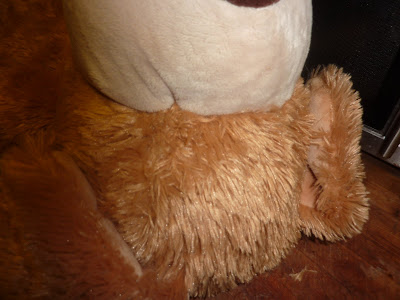 Creepy eyeless bear in tow, I stuck it in Bailey's crate. 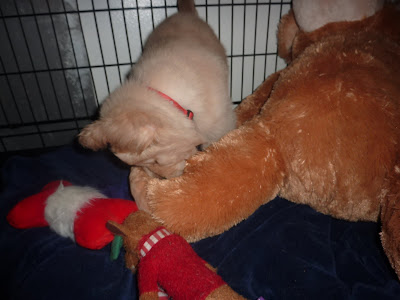 And then someone... to be kept nameless, but let's just say it rhymes with Paddie and is pictured below... dragged the bear OUT of the crate and over to her bed. 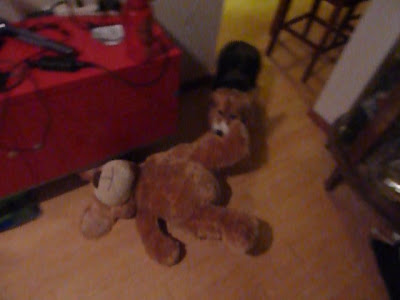 Finally, bear re-acquired (and after much doggie wrestling between Maddie and Bailey in the living room), and again put into the crate, here's what we have: 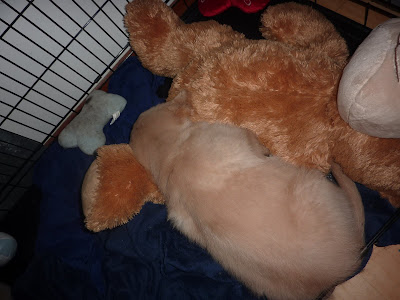 Yes, that's our golden retriever boy asleep on his bear.

He still HATES the crate. We're working on it. All things good come from the crate. Food, toys, the bear, blankets... but he still prefers to be with his people. Even with Maddie in there, he sometimes still whines. Thing is, he's also beginning to whine when he needs to go out. So... do we pay attention to the whining and take him outside? Or ignore him? Hm. We give it a good 10 minutes, and if it doesn't stop, we ONLY take him outside. No playing. Pick up dog, plop outside, wait, then come inside, back in crate. Hopefully, he'll realize that no playing comes out of whining. But man, he does work himself up. Again, we're working on it. It's not every time he's in the crate... thank goodness!

At least he has his bear to snuggle against when he finally settles down.
Posted by Jessika at 8:46 AM