While walking in the backyard to check on the chickens yesterday, I decided to check out the cherry tree in the far back. And by far back, I mean in the FAR BACK, as in behind and to the far left of the backyard chickens. Not visible in the photo below, but this should give you an example of the wildness of the far backyard. 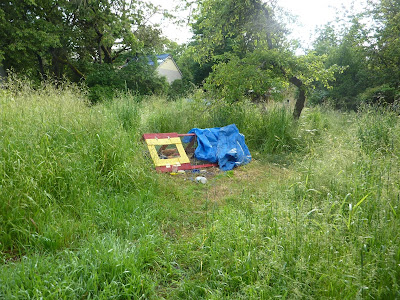 The tree, previously, had bitter small cherries. Either it was a bitter, small cherry tree, or they were not meant to be eaten as yellow/pink/red cherries.

B is not a huge fan of cherries. I know... what is wrong with him?! But I'm ok with this because it means more cherries for me! But, being the sweet sweet wife (he does read the blog), I know he does like cherries if they are dried.

So, I intend on picking as many as possible, pitting them (I have a pitter), and then sticking them in the dehydrator to make raisin/craisin-sort of dried cherries.

I should also note that yesterday? My seedlings that sprouted more than doubled in number, and they are growing rampantly. RAMPANTLY. We're talking 1+" per day. It is so exciting to come home after work. How much have they grown!? Pretty nuts, I tell ya.
Posted by Jessika at 9:35 AM