Finally, at long last, here are some of our photos from our trip down to San Diego. We left on Wednesday after work, drove 3 miles, stayed in a hotel. Then woke up at 3am, drove to Sacramento, had coffee with a great friend and saw her adorable daughter. Then drove down to San Diego, where my folks are. Thanks to LA traffic, we ended up arriving around 7:30pm.

Maddie was a trooper and never wined. No accidents, and she was calm the whole ride down (and back up). We wanted to take her so that she could visit my grandmother. My grandmother really can't travel much anymore, so the dog needed to come to her! I'll post photos of them together soon.

You never can predict things. Of all the things I thought Maddie would do at my folks, I never considered that she'd be patrolling the patio for hummingbirds. My folks have a long patio with three hummingbird feeders along the edge. Maddie went back and forth (repeat x1000) between the feeders whenever she saw a bird there. She even wore a path into the iceplant (which is good because my mom wanted to trim there anyway!). 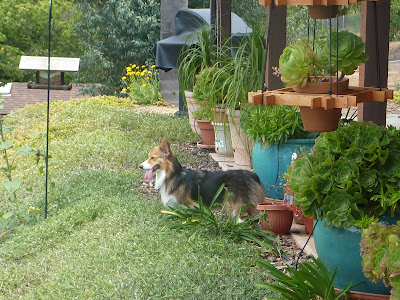 Heh heh heh, those birdies better watch out for me! 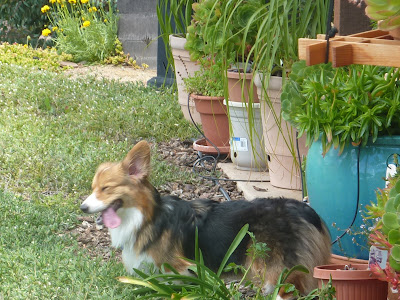 After B and I visited my grandmother on Friday morning, we headed off to the beach, leaving Maddie with her granddogparents.

Our first stop was La Jolla shores. Here is the walkway on what was/used to be/should have been the Children's Pool. It's been taken over by sea lions. 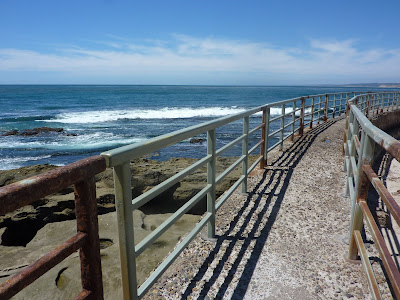 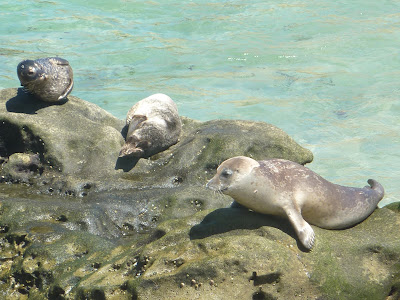 Lots of sea lions. It was supposed to be enclosed into a kid-area/calm water area, but the sea lions discovered it, took over, and now there's a huge debate on how to continue. I don't blame the sea lions. I'd want a nice little lagoon area too. 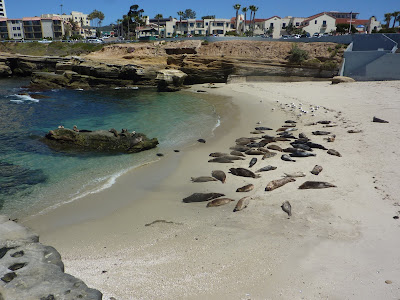 While in La Jolla, I bought a ridiculously huge hat. I love it. The saleswoman kept commenting on my skin. Um, yes. I'm from the Pacific Northwest and it's been a VERY rainy spring. "It's porcelain!" Um, not it's not, sales lady, but thank you for the compliment? Not the best shot of me, but I do love that hat. 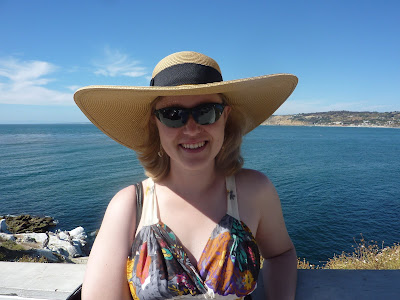 B overlooking La Jolla Cove. I remember snorkeling here as a kid and exploring the cave on the far side. I remember thinking "wow, I'm like the first kid to ever do this." No, I was probably preceded by thousands, but I still felt darn nifty. 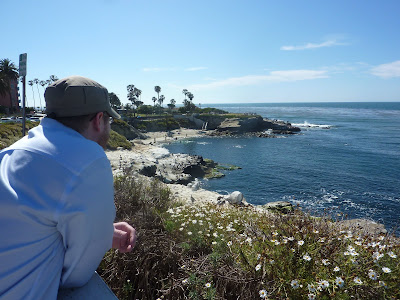 We next headed through downtown San Diego and up and over the Coronado Bridge to... Coronado. We headed to the Hotel Del Coronado, because it's always pretty there. We walked along the beach and had a fancy drink at the hotel bar, overlooking the ocean. Yup, pretty darn nice. It was a little windy (always is there), hence my hat/wind hair. But, it was such a clear day that you could even see the Islas Cornados in the distance. Usually, you can't due to cloud cover. 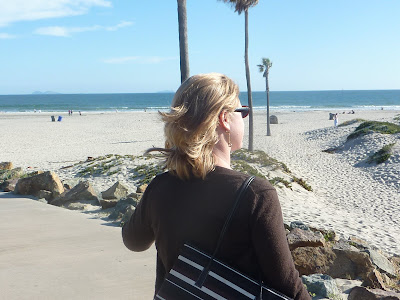 The next day, again after visiting my grandmother, we went to Balboa Park. Here is the atrium and the botanical gardens. I love this building. I think it's amusing that in other places, the botanical gardens are completely enclosed, with light and warm air pumped in. San Diego? It just looks like a building, but actually, there is no glass between those slats. Open air. 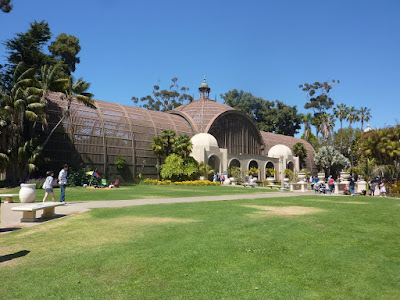 Yes, I wore the hat again. B had forgotten his sunglasses, so he had to borrow my mom's old clipons, but it all worked out. 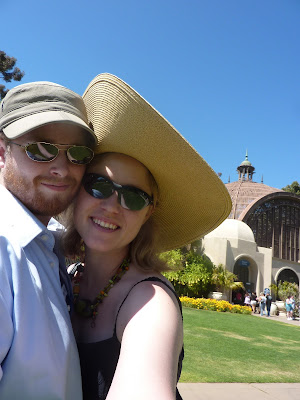 The reflecting pool in Balboa Park. Home of a few FAT koi. 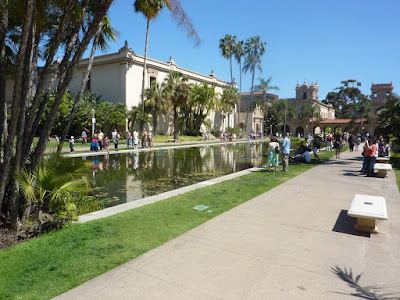 Lilies. I think if I have a pond someday, it will be for the water lilies. 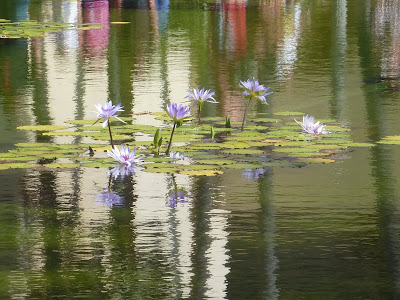 The second part of this sign really gets me. 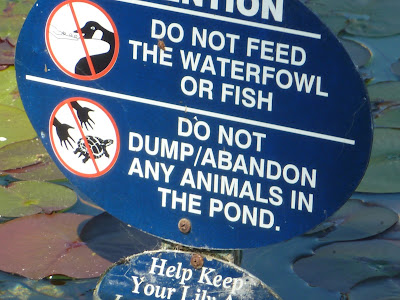 The pool was also home of quite a sight. Look at this guy's feet. Yes, he's walking two rabbits on leashes. ON LEASHES! RABBITS! And he's pretty hunky. The whole thing cracked me up. As did watching people do double takes as they looked at him. 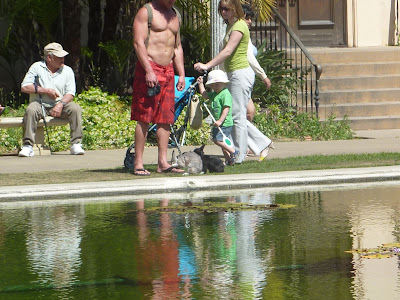 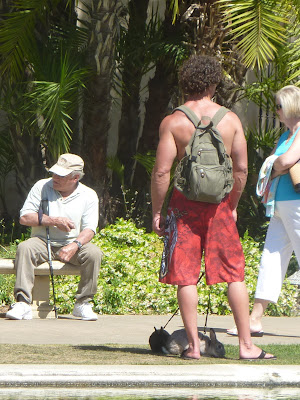 Back at home, Maddie continued to attempt to destroy her giraffe (gift from my folks). 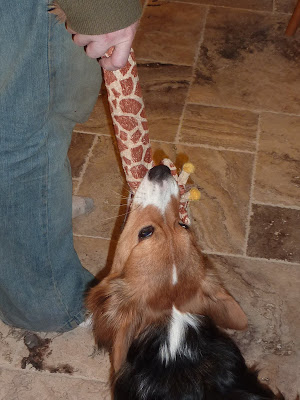 The final full day, B and I went wandering around North County, stopping at a few towns and at a few wineries. We'll enjoy the purchases from that afternoon for quite some time. No photos though.... the camera was acting up.

And then, on Memorial Day, it was time to head home. My grandmother and parents both tried to keep Maddie, but in the end, she decided to stick with us.

This is how she slept for a good hour or so. Completely boneless dog, sunk in into my skirt. 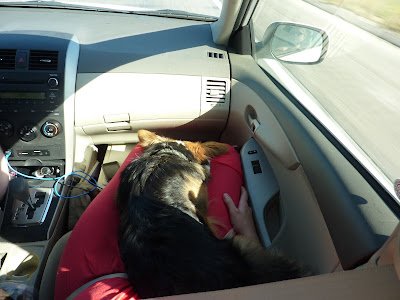 Oh yes, and her behind on my arm. 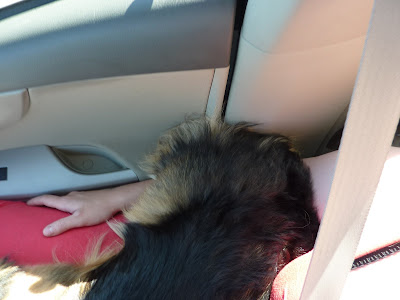 When she woke up, she had this deliriously happy look on her face. 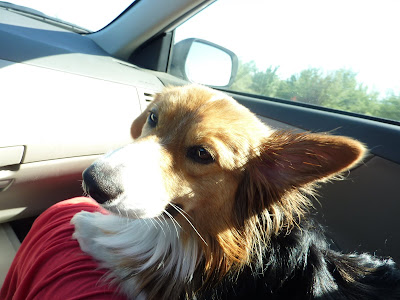 In the Central Valley, the sun was quite bright. 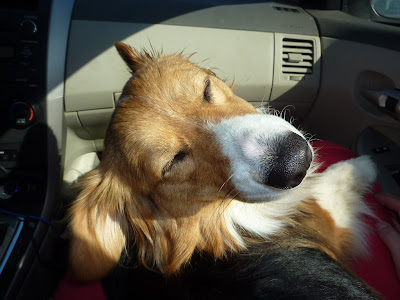 But again, combine the bright sun with happy dog, and you get this drugged happy doggie look. 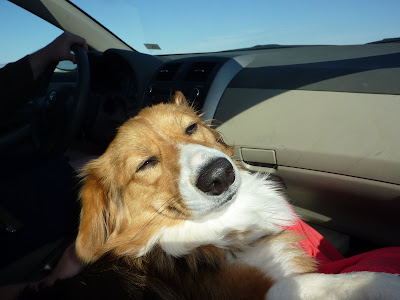 I gave her sunglasses to wear for a while, and she seemed pretty happy with them. It was also pretty funny to watch us drive by truckers and have them do a double glance at the sunglass puppy beaming up at them. 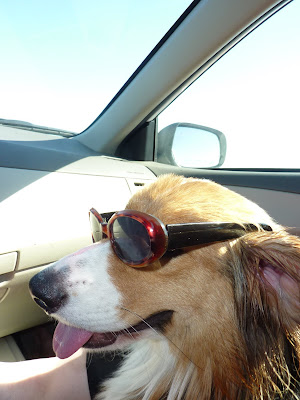 For some reason, this pose totally reminds me of Mick Jagger. 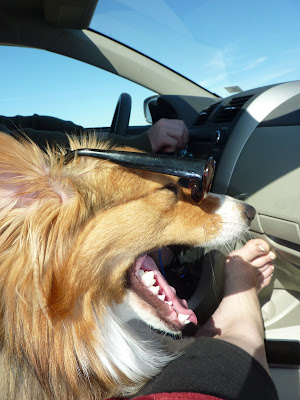 But, when not sleeping and not druggied dog (no, we did not give her anything, she just looked happy), she was alert. You know, in case any hummingbirds happened to fly into our car, I guess. 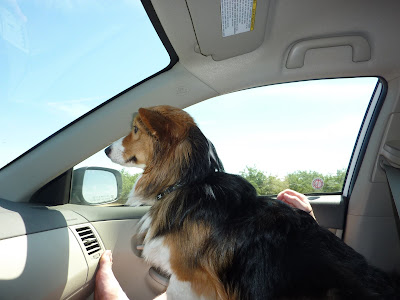 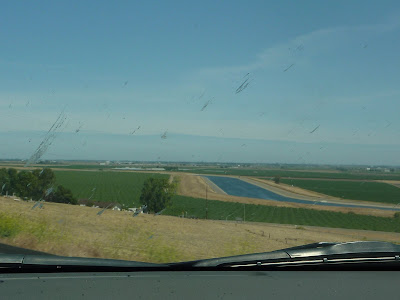 There's ALWAYS some issue with water. Here are some trees that supposedly have had to be let go because of water shortages and other issues. 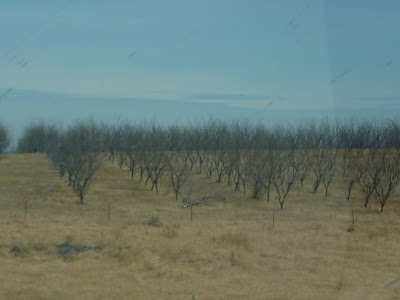 But, soon enough, we were back in Oregon. Much greener. Maddie also served as a book rest during part of the trip. Really, that's the main reason we brought her along. Book rest. That and the fluffy bottom. 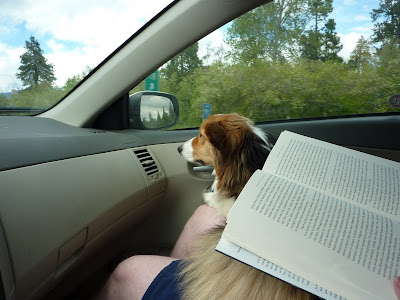 We're quite sure that one of her joys in life is to stick her nose in AC vents. Pretty darn certain. 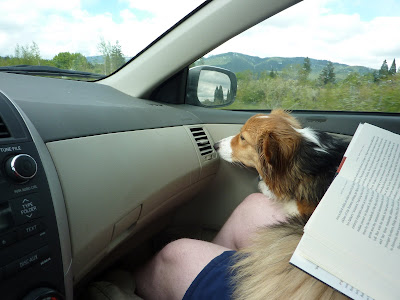 And that was our short and sweet trip. We put over 2200 miles on the car in just over 5 days. But, the drive wasn't too bad. And we had a lot of fun. It was nice to play tourist without most of the tourist expenses. Since we see my folks pretty regularly, they were ok with us not hanging around at home. We had a darn good time. So did Maddie.
Posted by Jessika at 9:38 AM