I saw an ad yesterday on Craiglist (seriously, how often do I use that phrase?) for silkie and frizzle chickens. I'd been keeping an eye out for them, so I jumped at the chance.

I can't take photos right now; they're in my neighbor's makeshift bin. This weekend, B and I are going to fix up a nice home for them. So, while they're in the bin, they're hard to photograph. But, I've found helpful photos, and I promise to take photos this weekend.

Two partridge (speckled) frizzle chickens. They will eventually look like this, mayyybe without as much head gear, but DEFINITELY the frizzle feathers: 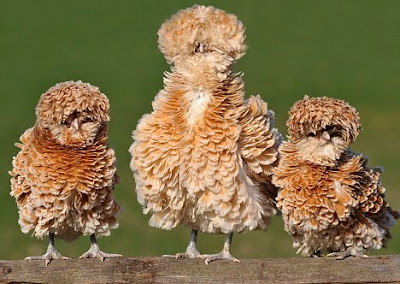 How do I know they are frizzles? Because right now, they look something like this (their feathers are lighter-colored though): 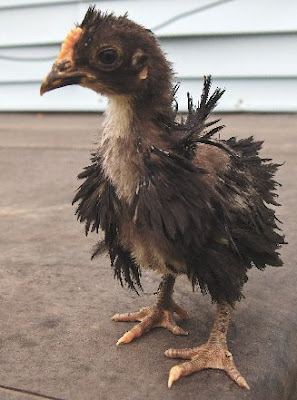 I also got two partridge silkies! 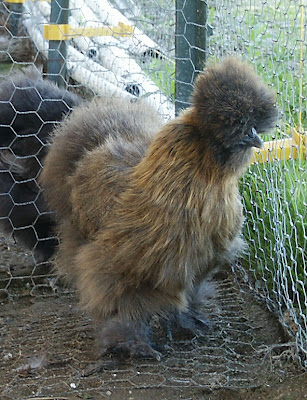 And one red silkie... 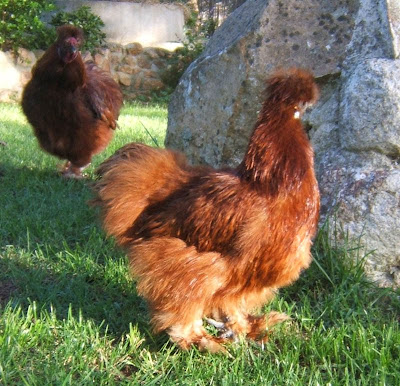 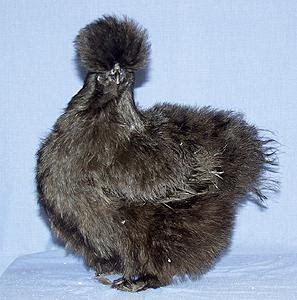 I am still on the hunt for a white silkie. There's one about 70 minutes away from us, but I have not yet made myself that much of a chicken fanatic to drive that distance.

All the newbies range in age from about 5-8 weeks. Yay fully feathered and able to go outside! However, they are straight run... so I may have a few roosters. Eeeek.

In other chickeny news, my teeny buff orpington is doing very well, and she gets to go back in the coop tonight! She had been infected with northern poultry mites. This is pretty common and one of the reasons I inspect my chickens. The cure was pretty simple: Cover her in dietemacious earth powder. Because we've had hot weather, and I kinda stressed her out with her bug treatment, she's been in a nice cool box in our bathroom (bathroom stays colder than the laundry room). She is MORE than ready to go back outside. Picture lots of pitiful chirping.

And, this weekend, B and I are going to expand the pen of the chicken coop. We'd been pondering what to do with this area between the pergola and the coop... it just gets really weedy and bleh. Plus, it's shaded, so unless we want to plant shady plants or put down boring mulch, we're up the creek. Ahh, so we decided to just extend the chicken pen. $15-$20 (since I already have most of the other supplies), and the chicken pen will double in size. I'll fence off a portion of the coop for the newbies. Let them get bigger before introducing to the rest of the flock. This will take the pen from it's current size of 128 square feet to 256 square feet. Lucky freakin' bird brains.

Plus, the fence extension will not get the chickens TOO close to the pergola. I didn't want to make anyone uncomfortable eating food under the pergola with poultry REALLY close by. :)
Posted by Jessika at 9:27 AM