Insight on life (and roasted pumpkin-- not related)

I realized yesterday that in quickly typing my blog post , I hit the nail on the head. Strange how sometimes you've been searching for the right way to say something, but when you aren't particularly thinking deep about it, the truth comes out. So yesterday, I really summed up what I want in my next job: more meaning to my job than just its purpose being to earn us a paycheck.

Wow. It's true. While a decent salary would be nice, I've stepped beyond the importance of the job being that final take-home number. Don't get me wrong, I don't want to work for free. B and I have goals and those goals require incomes. But the overall satisfaction of what I'm doing has become more important. This darn adulthood thing occasionally stuns me.

ANYWAY, on to pumpkins:

I picked up a few (ok 7) pumpkins from various places. One from our yard, one from the store, and five from a local farm. The farm? $1 each. Nice. So now, I have to roast the pumpkins.

I have a secret for you though. Most places say just wash the pumpkin and stick it in the oven. I wash the pumpin and CUT IT IN HALF.

I cut it in half to get the seeds. I don't want them baked yet, or covered in baked goop. So I scoop out the seeds and goop (goop to chickens, who LOVE it), and then put the pumpkin back in the oven, both halves together. The weight of the top half keeps a good seal so that the pumpkin stays together.

And, then, 1 hour to 1.5 hours later, the pumpkin comes out looking something like this (ignore the pan. I use my nasty pan for pumpkins): 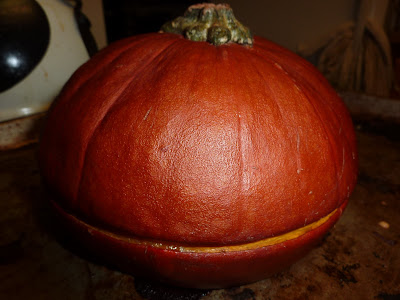 How do you know you've done a good roasting job? Thwap the pumpkin gently with a spoon. 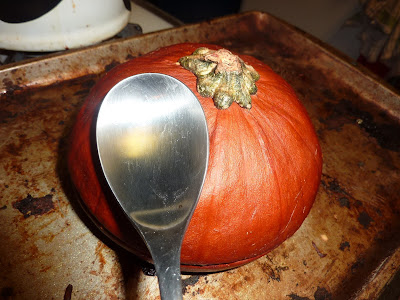 If it's done, it will easily leave a dent. 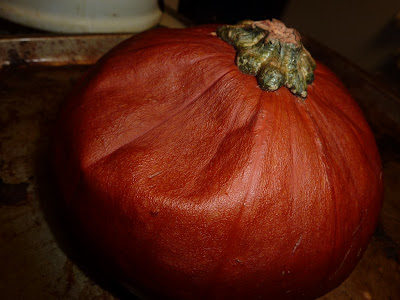 The cut-in-half method is also good for taking off the shell. The top half literally peels off. I scrape each piece a little (maybe 2-4 tbs of meat on there total though)... 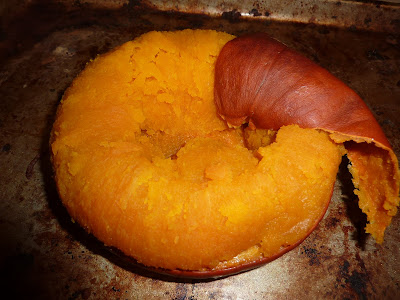 but it's really easy, because the pumpkin is cut in half. 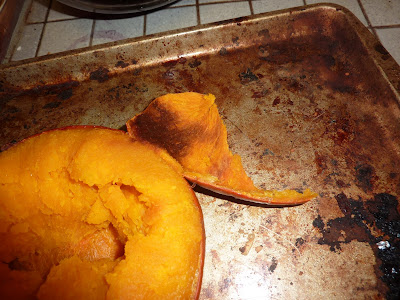 That leaves me with a ball of cooked pumpkin to scoop. Once that is done, I have the second half of the pumpkin, which, because of the halving, looks like a bowl. Perfect for scooping.

You can take the cooked pumpkin and freeze it, or put it in the fridge if you're using it soon.

EASY, right? And it tastes GREAT in recipes. I have the space in our freezer (which is actually more efficient if you have it packed with stuff), so I'm doing a bunch of these. That way, in January, etc, when pumpkin is hard to find, I can easily find it for our usage. I have a few pumpkin recipes to try too, so I'll post about those once I run through the test runs.

Baking rules for pumpkin: 350 in the oven (racks arranged so pumpkin is in middle of oven) for 1 hour to 1.5 hours. Use the sugar pie pumpkins or other pumpkins that are meant for baking. Most the carving pumpkins are too big and are NOT good baking pumpkins.

PS: I use the nasty baking pans because IF the pumpkin accidentally splits, it might ooze, and if it oozes while baking, I might not realize it right away (because it's in there for 1-1.5 hours). Since nothing I'm scooping is touching the pan, why not use the nasty pan?
Posted by Jessika at 8:24 AM