New dog bed? I think not.

Maddie's dog bed has a corner it has to go in. In our small house, there is limited space to begin with. Additionally, it has to be a space able to be seen by us so we can make sure she's on it when she is supposed to be!

She had a much bigger dog bed, but it was just TOO big (and beginning to look pretty gross). So we decided that bed will be her "dog is too wet to be let loose in the house, so she stays tied (indoors) to the back door on her old bed" bed. Hey, it's soon to be rainy winter, so one has to plan for these things. Or else risk muddy indoor frolicking.

With much exclamation (by the humans) and much body wiggling (by Maddie, mostly because the humans sounded excited), we gave Madster her new bed last night. It's significantly cushier than her old bed, so she pounced on it several times. It's in the same place as her old bed, so she has accepted it as her bed. This was confirmed when I gave her a treat. She knows to take all treats to her bed, and she took her treat to her new bed. Success!!

But this morning, when I woke up and let Maddie out, I came across this: 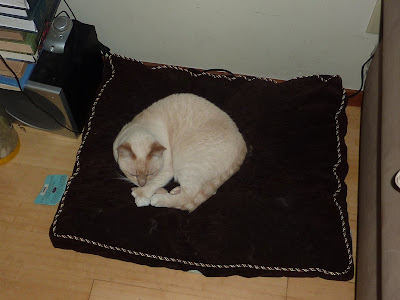 Stupidly, I had thought: Dark bed=Maddie fur and dirt won't show. ACK! I forgot about Paddington! See the clumps of Paddington fur on there? Sigh, and the TAG is still on the bed even.

Maddie was a bit perplexed. Pads had often sat on her old bed, but it was big and Maddie was cool with it. 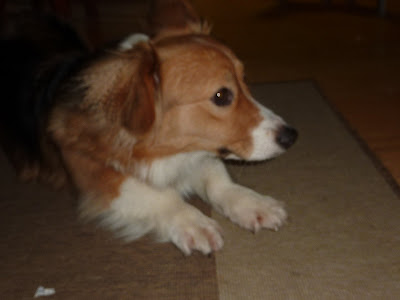 I realized that Maddie in this photo is licking her lilps. Not a good sign. And Pads is staring straight at her. Pads was the cat that swiped Maddie when they first met. No more swipes have occurred, but Mads knows to just let Old Man Pads be. 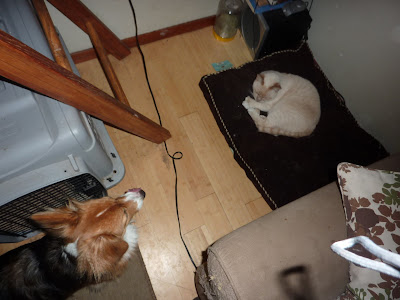 Maddie looks confused in this photo. As if she's looking for another bed. 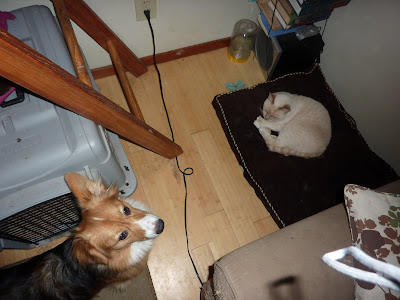 And finally, resignation. Maddie decides best to not bother the cat and makes herself comfy on the rug. (PS: my shoes only look HUGE in this photo because of the angle. I promise I'm not a giant) 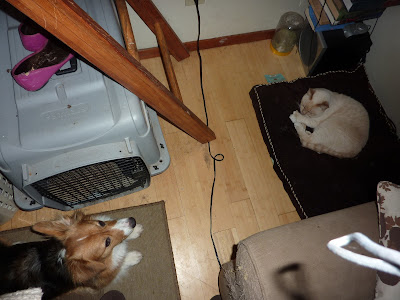 Drama doggie mornings. Maddie is not allowed on the couch without permission, but I know that now that I'm at work, that's where she's at. So cat gets the bed, she gets the couch. Stinker dog.
Posted by Jessika at 9:41 AM