I borrowed this cookbook from a friend, just to try it out. I ended up buying myself a copy (from Amazon's used-but-looks-new section) because I had to have it. The cookbook is: Vegan Planet. 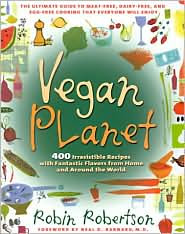 Before I go any further, I am not a vegan. I am not a vegetarian. I try to eat local, well-raised-in-good-conditions meat, but that's it on the hopeful guidelines.

So why am I using a VEGAN cookbook?

Because I swear to you that if you do cook vegetarian/vegan, you'll accomplish a number of things.

1) You'll expand your repertoire of recipes. No meat in the house? No problem. You know how to cook without it.

But most importantly 3) You'll learn how to spice food.

So many meat recipes focus on the taste of the meat. If there are spices, they are generally you're typical, found-prepackaged-in-a-spice-rack spices. And the focus is not on the taste of anything else but generally, the meat. Ok, sometimes a roasted veggie gets thrown in. But, generally speaking? Meat.

But vegetarians and vegans don't have that option, so it becomes about the TASTE of the FOOD, not just one ingredient. And the results are amazing. Luckily, we have a few bulk-bin spice stores in town, so I can easily get more unknown spices for cheap (usually under $0.50 for the small portion needed). It's more about the combination of tastes though, that makes it fun.

Take last night, for example. I made what ended up tasting like thai chicken. Ok, I did cheat. I did throw in a few chicken breasts, mostly because my husband likes meat and somewhat raises an eyebrow at meatless recipes if cooked too frequently. (but you can do that with vegetarian/vegan recipes. It's allowed. By me.) The recipe called for a sauce which included rice vinegar, soy sauce, basil, peanut butter, water, chili powder and garlic. Weird-sounding? It was delicious. And the rest of the concoction included me chopping up napa cabbage, more basil, green bell peppers, and carrots.

It. was. delicious. We ate the mixture on lettuce wraps.

I'll start posting more tricks as I learn them. But this sure is fun!!

In other news... interview tomorrow. I'm hopeful. It's with a good group, and it would be really fantastic to have more meaning to my job than just its purpose being to earn us a paycheck.
Posted by Jessika at 9:33 AM