Well, it's been almost a week, so here's my post. Last Saturday morning, my grandmother, my Oma, passed away.

It's an understatement to say "I loved her dearly."

She led an incredible, INCREDIBLE life. Born in Poland in the 20s, she was taken by the Germans to work in an ammunitions depot in WWII. She came back home once for a visit, where her mother tried to fool the nazis into believing my grandmother had a fever (hot compresses, etc). The Germans weren't fooled and they took her again. She never again saw her parents. She was fourteen years old.

She escaped the depot in the dead of night. Literally escaped. And from there, you have one barely-teenage Polish girl having to suddenly fit into nazi Germany. Her stories, when she told them, were amazing. She was in Dresden during its destruction (a fact I only found out because I happened to have the book "Destruction of Dresden," and she saw it and said "oh, I was there for that. It's why I have problems with my one foot being cold or numb. I had to cross that town during that and in snow.") Stories like this were not uncommon. 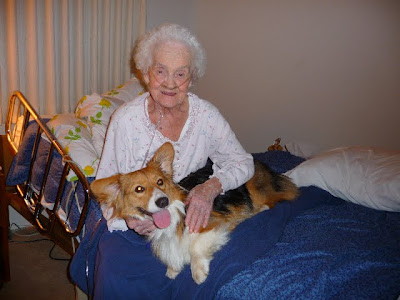 But mostly, I'll remember my grandmother for what I saw. A woman who loved to cook and feed people. A woman who hated money being spent on her, but if you DID something (action-wise) for her, she would not forget it. She was pretty short, so I quickly met her and kept growing, but she didn't care.

She's the woman who would squawk if you tried to pick her up.

She's the person who taught me how to cook my favorite foods (and the foods that ended up being served at our wedding).

She's the person who taught my parrot (when we were on vacation) to say "Hey Baby!"

I will forever do things because of her. A box of chocolate-covered cherries at Christmastime. Split pea soup with kielbasa on Christmas Eve. Because of her, I learned how to pinch with my toes ("bat toes" she called it, and yes, we used to have bat toe wars).

She loved her dusters-- these super-thin daytime smock dress things that made you look cold just by looking at her. She loved them, though she would always complain about being cold. If we got too wild around her, she would just say "oh, you're making me nervous!" and we'd stop.

She had the most adorable accent.

She was extremely adept at rummy (card game).

Her laugh? A cackle. You couldn't help but smile when you heard it.

She loved candy. It really bewildered a few doctors because she had a bad habit of eating lots right before blood sugar tests.

She was a knitting machine, especially in the mid 2000s. I have ample scarves. I really stink at knitting, but a couple of years ago, I decided to send her a scarf. I used huge needles to make about a 4' long, airy scarf. She thought it was not a scarf because it was so airy. But, never one to waste, she UNRAVELED the entire scarf and made me a potholder. True story.

She fed my parents' dachshund so much while they were on vacation that the dog's stomach dragged on the ground when they got back. My parents' next dachshund had a picky stomach, so he could only eat kibble. No handouts (or you stood a good chance at being at the vet's the next day). This was torture for my grandmother.

From her, my mother learned the joy of gardening. From both of them, I learned too.

She used to pinch me on my cheeks, utter Polish words, and kiss me. 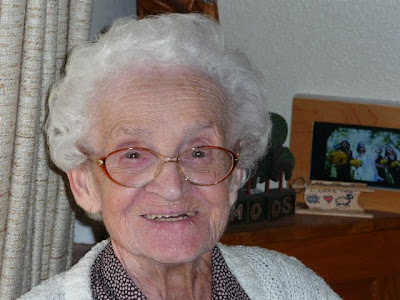 I think I'm going to throw a big dinner sometime in the next few months. Out will come Oma's recipes, one by one. We will have friends come, and we will celebrate.

I do take solace in the fact that she did have a full life. She was in no pain at the end, and for that, I'm thankful. I like to think she's with my grandfather and uncle, and I know she's missed both of them.