Here's our bathroom. It's not huge. But, the door opens outward (helps the room not feel small), and we've never had any problem with it. Really. It's a bathroom. Do you want it to be huge and spend a lot of time in there?
(Note: these are photos from before we moved in. We've since done stuff) 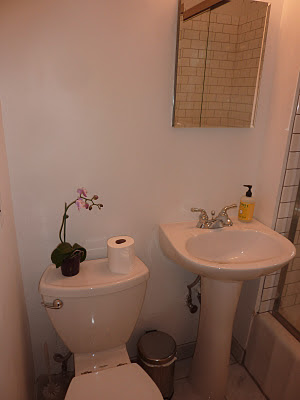 But, in painting the room, as I did this weekend, we both confirmed to each other something: We do NOT like our sink. It's graceful, sure, but it's completely useless. You can't leave ANYTHING on top of it without it inevitably slipping into the sink. But, as you can tell from the photos, the tub is right there... so how much do you want to have a vanity in the way of your shower? 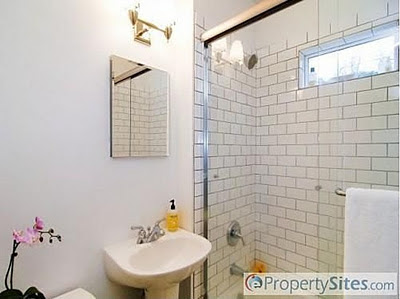 But then we saw this redone bathroom over at Young House Love: 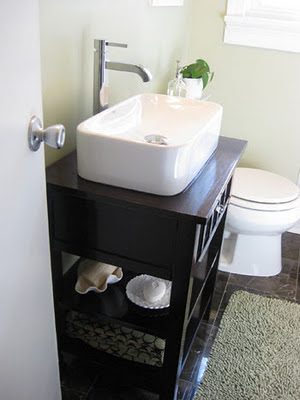 And yes, that vanity would fit in our bathroom. It'd stick out about as much as the tip of the oval stick out right now, and the sink would end up being almost EXACTLY the same height. 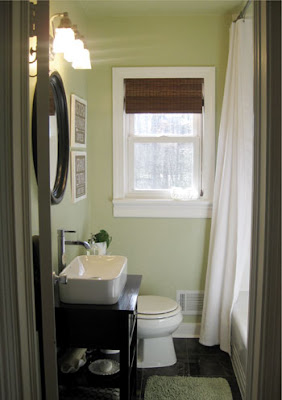 What's even more dangerous is that the table is still available at Crate and Barrel. Now, $250 is more than I normally spend on what is, essentially, a large nightstand, but we can look past that since it really does need to be a good piece in order to be a bathroom vanity. Oh, and the sink is still available too at Overstock (LOVE that sink). And yes, the genius folks over at Young House Love really did build their vanity. Because really, what is a bathroom vanity other than a glorified cabinet with a sink on top? No, I'm not making the project sound EASY, but it's not exactly rocket science either.

We have the shower door issue to deal with. I might cut a piece of cardboard and lay it on top the sink for a while (obviously removing it when not in the shower-- otherwise, how'd we wash our hands?) to see how it impacts being able to get in and out of the shower.
We also have the issue of: our current sink is absolutely fine right now, albeit very boring and useless for all things other than washing your hands (and even then the soap will likely fall into the sink... just saying). But it works. It's pretty. It's just boring.
Anyway. I think, for now, this idea is going into the "to do someday but maybe get the pieces while they're still available sometime this year" category. And first, we'll have to do the weird cardboard cutout sink thing.
Posted by Jessika at 9:35 PM