We live very close to a large, cement-covered reservoir, which is perfect for ball fetch games. The problem is that since the surface is cement, and since it is winter and thus wet often, our pup's feet (especially Bailey's) were getting cracked and even bleeding (one nail got worn down)! No! We remembered we had scored these booties at an REI Scratch & Dent sale a while back. They were a bit roomy on Maddie, but on Bailey they were snug, making it difficult for him to get them off easily.
I mean, look at that face... 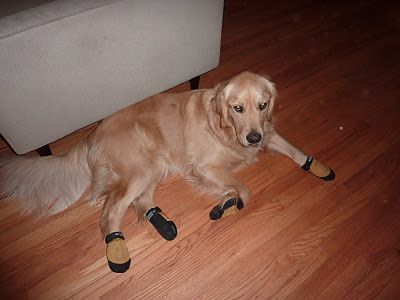 But, after only a few seconds, he quickly realized these booties weren't half bad. Too bad I didn't get to play the song "Here Comes the Hotstepper" in the background.
We didn't get a chance to test them out-- it was dark when we put them on--- but we'll have to report back how he handles the ball running at the reservoir. 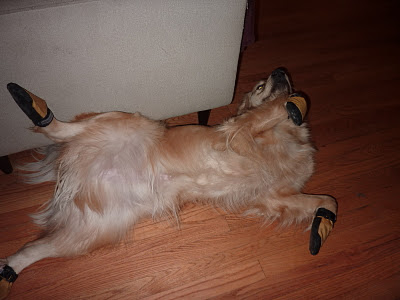