Snowshoeing with the Puppy Dogs

We went up into the local mountains (about an hour away) today to go snowshoeing.
To say that driving in snow makes me nervous is an understatement... But Bob was a great driver, and we returned unscathed! Yes, even though the roads looked like this: 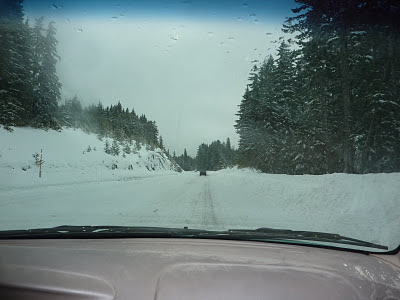 EEEK!
My nerves were not calmed when we put the snowchains on either. Both snapped off within a half hour. SIGH. Wasn't a fan of the type we had anyway, but that is not the way I like to have to get new chains. Also, running on a highway, in the snow, to go and get the fallen off chain and hoping no traffic comes while I'm out of the car (since there's not much of a shoulder)? NOT FUN. No traffic came both times, and I ran like the freakin' wind.
The puppydogs LOVED the snow. Bailey faceplanted frequently, but he also chose to bound into snowdrifts frequently, so this wasn't surprising. He had large, tennis-ball-sized chunks of snow attached to his tummyfur. 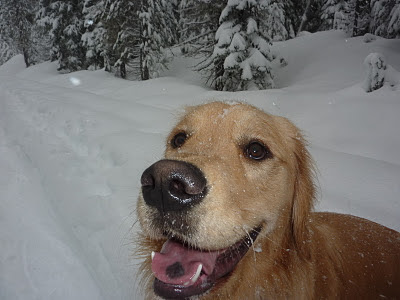 Maddie's pantaloons (the fur on her short little legs is quite impressive) were so covered in snow that she looked like she had huge, furry boots on. She moreso bodyplanted into snowdrifts because of the short legs, but then she bunnyhopped around and was just fine. Everyone was impressed with her spunk.
And then Bailey knocked the camera out of my hand and into a snowbank. SIGH. So, there are only a few photos and one, shaky video. Next time, next time.
The dogs slept the whole way home. Bob and I stopped for a bite on the drive back, and while we were inside, Maddie upgraded to the front seat. Sigh. Cold wet doggie behind on the two front seats. Luckily, we had stuff to throw on the front seats for the rest of the ride home.
Posted by Jessika at 8:06 PM