I'm really excited. B and I have decided to invest in a few plants/bushes that will mature and continue to produce. We will put them in high raised beds, so that when we eventually move, we can remove the boards of the beds, and easily access the root ball for a non-traumatic plant move. We're thinking about currants, blueberries, goji berries, strawberries and (maybe) raspberries.

I saw small ad the other day for 3-year old Duke Blueberry bushes. They were for an amazingly low price, and the guy had a farm of them that he was clearing out. So these were well-cared for blueberries at a low price, on known 3-year old wood (blueberries don't produce for the first 1.5 years). The problem is that if you get them when they're at a nursery, sometimes the actual age of the plant isn't known. 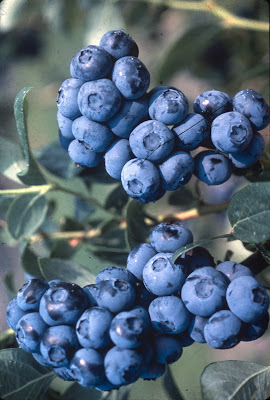 Dukes are really nice because, unlike other blueberry plants, the berries grow in clusters. So what was a tedious job in hunting and pecking for blueberries becomes an easier task; just find the clusters!

They should only produce a handful of berries this year, especially due to the transplant. But, when they're fully mature? We could expect up to 10-15lbs of berries per plant. We're getting twelve bushes. 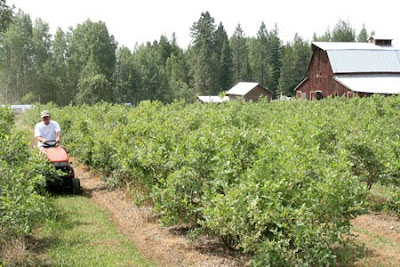 They're pretty small right now; about 30" tall. But they'll grow. And by getting them now, we'll be hopping on the aging plants to maturity wagon before we own our own place, so when we do finally own our own place, we won't have only baby plants. The bushes can get to be about 7' tall and 3-5' wide.

The snag in the plan though, is our ground is in an OLD flood plain (no worries nowadays). That means there is a LOT of river rock in our backyard. The soil is great, but the river rock is pretty dense. We need a strong tiller to have its way with the soil.

Luckily, I found a garden guy with a tiller. We were going to rent a tiller, but there's the concern that the tiller would get damaged and then what? Plus, how would we transport a honky tiller in our sedans? There were logistical problems, and this guy (a student) is the answer, hopefully. He also has a truck, and so he's picking up the additional soil and some sawdust (blueberries like acidity, sawdust is acidic). We'll pour the soil on the backyard area where the blueberries are going, and then he'll till it all together with the backyard soil, tilling the backyard soil in the process.

This all goes down Sunday, and I am SOO excited!
Posted by Jessika at 9:51 AM