We haven't received any snow this year here. That's not unusual, but in my 5 years in Oregon, this is the first completely snow-less year (it's snowed in other parts; just not in my city).

And, generally, it is below freezing frequently from late Nov-late February. This year though, we had one cold snap in early December, and not much since. It's hovered in the low 40s at night, and that's it. That's still cold, but it is atypical. 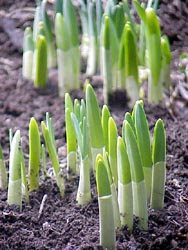 All this has me bracing a bit. Is this "warm" front just going to make a sudden cold spell that much harsher?

I'm still planting my plants in late April to early May. At least, that's when they'll go outdoors without covers. It is just SO WEIRD.

Supposedly, there's an El Niño pattern in the Pacific. Warmer water= warmer weather, or at least, that's the theory.

It's not like I have a TON of things outdoors. It just... it's weird, ok? Weird. It feels like mid March. I'm hoping that moderate weather now won't mean a surprise later on that may have me scrambling. I love Oregon summers, and I'm hoping nothing messes with that!
Posted by Jessika at 7:47 PM