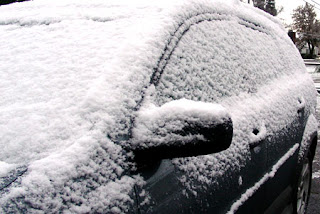 you get the idea. My car had about this much snow on it this morning! Luckily, it was not frozen snow, so I only had to take the broom end of my ice scraper (2' long, brush on one end, chipper on other, comfort grip... B's dad is AWESOME b/c he bought it for us), and brush it off. The rear-view window only had light ice.

But still. MARCH! SNOW? You should see my building... it feels like we're in a cloud, but it's just because of the swirling snow.

I suspect it will change to rain later today. And sludge. It's not sticking on much right now... only cars and the tops of buildings.
Posted by Jessika at 8:51 AM