The cat that deserved wrath brought upon him.

A certain cat in our household deserves a whole bunch of whoop-butt.
I'm specifically thinking of you, Rumpole. Yes, YOU: 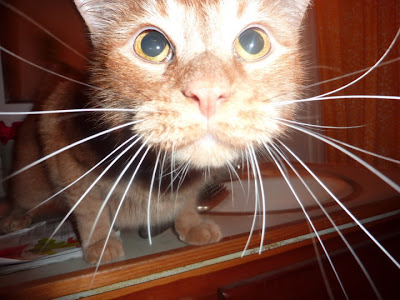 My guess is that something was bugging him. He's normally not a cat that does bad things. And by "something" bugging him, I'm thinking of maybe the dog. Ok, definitely the dog. Maddie can be a bit persistent with her nagging him to play.
But the payback Rumpole paid was not worth any of Mad's indiscretions.
Reel back to yesterday morning. I sat down on the floor and let Maddie out of her kennel (she sleeps in a dog kennel downstairs). Out she comes, gives a stretch or two, and then she hops on my lap, like a bunny rabbit, and leans against me. It's our morning routine.
But yesterday morning, she smelled. She smelled like cat pee.
Upon further inspection, I discovered that an evil cat (see suspect, above), had entered her kennel and peed on her dog bed cushion.
A bath, a cushion washing, and a scrubbing out the kennel later (and a mental note to keep the kennel door closed during the day), and we're all back to normal.
Maddie still is wondering why she had to take a bath at 7:30am though. She thinks she smelled fabulous.
Posted by Jessika at 7:56 AM