We have really struggled with Maddie's dog bed.

First, she doesn't really like beds. She loves to go all spread eagle on the floor (hardwood) or rug. Literally-- legs in all four directions. I don't want to thwart this behavior, because I find her little teeny corgi back paws dragging behind her quite adorable. And that fluffy butt. Oh!!

But she needs a bed because... she knows that's where she eats her treats. BUT...there are other problems.

Finally, it has to be easily washable. We learned this the last go-around, when the cats decided the bed smelled like something to be peed on. This from our never-ever-spray cats. They didn't spray. They just found a new litter box... and poor Maddie was taking her treats there like a good dog... but then she'd sneakily eat it on the rug because her bed smelled.... SIGH. Luckily, the humans quickly realized what was wrong (and smelled what was wrong, those punk cats!) and took the bed away. So ease of washing needs to be done too.

Oh, and it also needs to be pretty heavy because it's at the foot of our ladder and we don't want to slip. And the little booger dog does careen into it at pretty high speeds.

So, not wanting to spend tons of money on this already-growing-in-price project (thanks cats), I headed to Goodwill today. At first I thought "old car mat with stuffing sewn on" but that's not easily washable. Hmm...

Then, I found it: 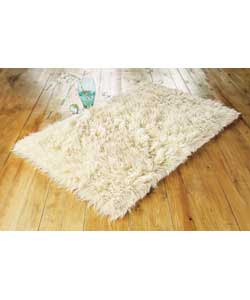 A knock-off flotaki rug. Yes, seriously. And it's just the right size for her and the space.

Better yet? SHE LOVES IT. I gave her a biscuit and told her to take it to her bed (she knows that command), and she RECOGNIZES IT AS HER BED. Better yet, the oh-so-good, amazing, wonderful pooch found her bone in the house and is currently gnawing on it ON HER BED.

Love this dog, can you tell?

We'll need to put some rug backer on the back of it to help slippage, but hey! Great. Best yet? Project will come in at under $10.