Meet the Fluffy Ladies. Well (as B so very well put it this morning), right now they're more appropriately dubbed "the Fluffy Babies." They're 8 days old! I canceled my online order. Why? They were going to send me 15 (a few too many to start out with for me), they wouldn't get here until March 6 or so, and I was worried they would not stand up to the air shipping very well. I found this guy (a local farmer/rancher) who bought large batch (large batch= they stay warmer and ship better because there is more of them), but then needed to sell some. And so, that's how I got my girls (yes, they're all girls). 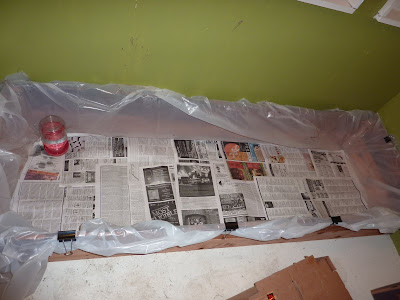 This is a photo of their pen. I took a cedar garden box, 2'x6', lined it in heavy plastic, and then put newspaper down. I later added a small trainer roosting perch, straw, and shredded paper. And food, of course. That's the water bottle there in the corner. 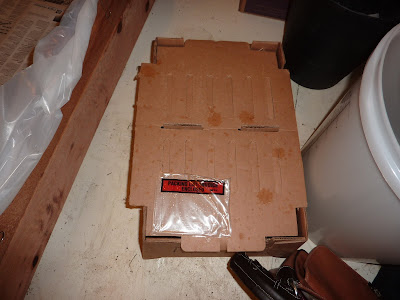 Here's the box they must have shipped inside. The farmer reused it to transport them from his city to mine (he works in my city). 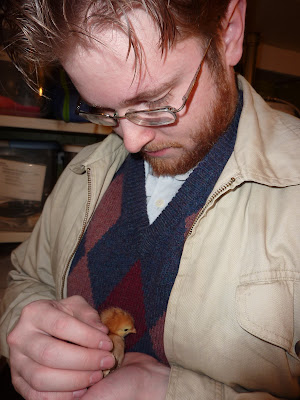 B with a tiny one. He was worried that he would hurt it. What a most excellent photo. 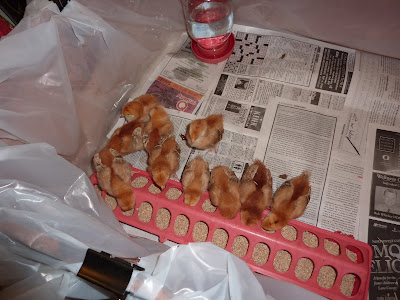 Ahh, all the chicks discovered the food bin!!! GOBBLE GOBBLE. 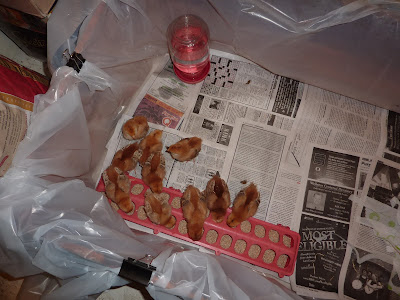 Another GOBBLE shot. Gotta love it. 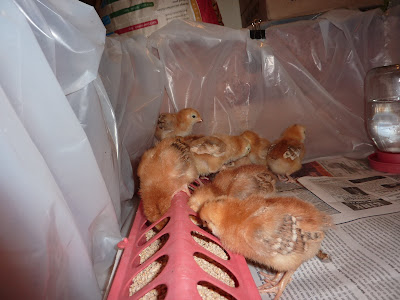 I love the audacity of that one chick. Why STAND on the paper when you can CRAWL OVER THE TOP of the bin and stick your head inside the other side? This taught me to move the food bin to the middle of the pen, so easier access to both sides could be had. 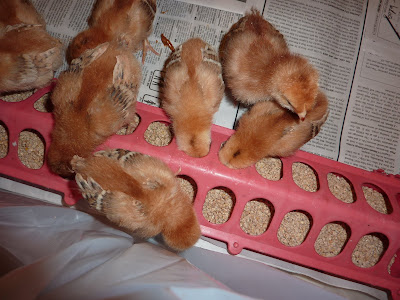 Look at them go! 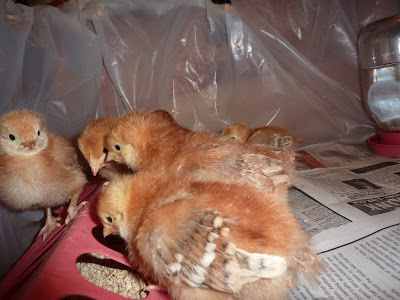 They are already getting their feathers in! They'll be able to go outside in 5-7 weeks, when they're more "teenager" sized and hardy. I have to build their coop now, don't I? :) I have plans all drawn up; it's just a matter of maneuvering around in mucky, soggy, wet weather. 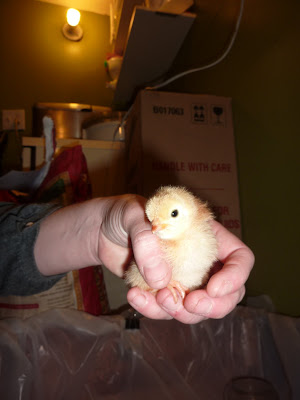 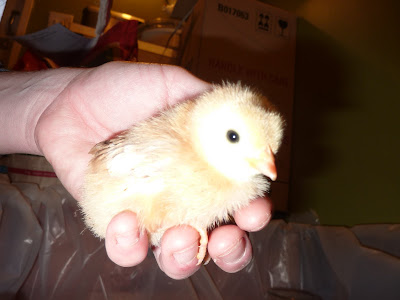 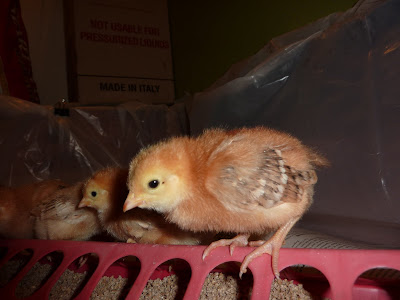 Another stand-on-top-the-feeder shot. I think they'll stop this a little bit since I put a practice roosting perch in (see shots, below). 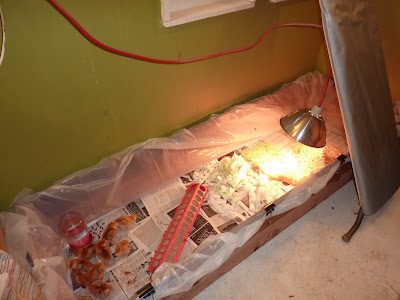 I couldn't figure out how to hang the heat lamp. Then I just realized I could take the old ironing board, lean it against the wall (there is something blocking the bottom feet too, so no sliding), and then use a clip to attach the lamp. Voila. No additional holes in the wall or ceiling. 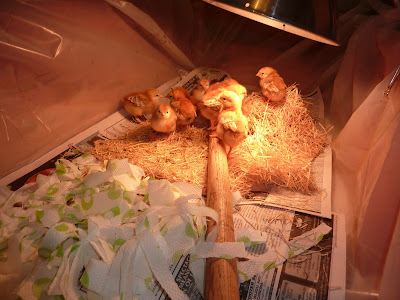 I broke my shovel last weekend digging out currents. Yes, my new, 1.5" diameter shovel. BROKE IT IN HALF at a thick spot. No, I am not the Hulk, though I felt like it. Anyway, I was just going to chuck the handle, then I realized I could add supports, drill in the handle, and make this the Fluffy Ladies' practice roost pole. And look! They took right to it. 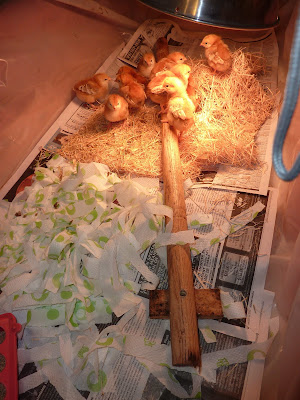 See, here you can see the small 1/2" high support "feet" which keep the pole from rolling. The green stuff is some cheap shredded napkins. 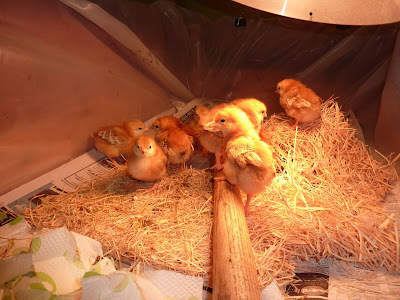 I love this little chick. Daring enough to try the pole, but not daring enough to use both feet. The other little one in the background cracks me up too; the little haystack is the closest point to the heatlamp, so that's one happy warm chick!

So, those are the Fluffy Ladies (aka: Babies, for now). More photos to definitely come!

I should add that they are all Rhode Island Red/New Hampshire Red crosses, and they are all pullets (girls). They'll eventually be a deep brownish, glossy red color, and will top out around 6.5-7lbs! My old Rhode Island Red hen laid an egg a day (she'd only miss a day about once every 2 weeks). Based upon that productivity and what I've read, these girls should provide us with lots of eggs. We already have friends clamoring for fresh eggs, even though that's 4-6 months off!
Posted by Jessika at 9:40 AM