Soggy & mucky with a dose of awesome doggie.

Generally speaking, it doesn't rain a lot. I don't think so... but this winter has been a pretty darn gorgeous one, so the squish of muck in my shoes is an unusual thing this year.

In the video, please ignore the patio furniture. It's all crammed messily together so that it stays dry. It usually looks nicer.

Damp is good. Drizzle is good. Both of those mean I can go out and poke around in the yard. In fact, it's pretty darn nice because the dirt looks rich and it's easier to dig. But raining-ponds-in-my-backyard?

I think the reservoir is mostly full. Starting around March, they usually don't release water as much because they want to to be full for summer. I only say this because the river is HIGH, and usually the reservoir (actually reservoirs) helps control that. I'll have to take a picture of the muddiness outside my office window to prove myself to you. Maybe that's tomorrow's post. Hm. Especially given that I won't be doing any work OUTSIDE. Grumble.

On other news, I am getting a few edamame sprouts! They are my "experimental crop" this year. I've cut back on the watering, and I'm hoping that provokes the others to sprout too. I think the tray that is sprouting is 1-2 days older than the other two trays, so here's hoping! It's a tentative plant to grow because of our weather. It may work some years, it may not work others. I'm starting it indoors, giving it a good head start to be ahead of the game when it goes outside in mid-May.

The dose of awesome doggie: 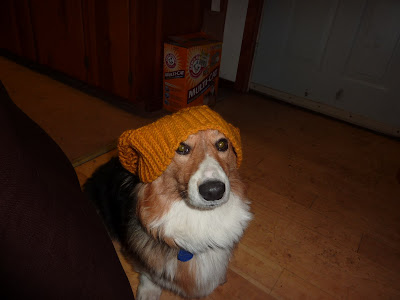 Yes, that expression does totally read "I have so earned the biscuit of which I have been promised.... I earned it about 5 photos ago."

It's her own darn fault for looking so cute when I goofily plop my hat on her head.
Posted by Jessika at 8:39 AM