The coop is nearing completion! 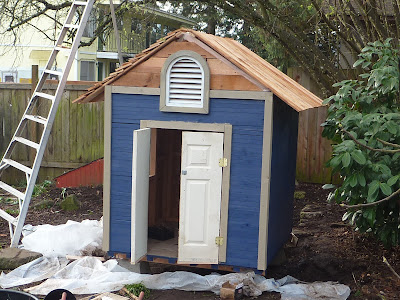 To do still: Shingle the other side of the roof, straighten out doors, hang perches and shelves inside, finish trim all around, fix up paint job, hang crescent shingles on front cedar portion, hang and paint shutters, install hooks to keep shutters/ doors open, make/fill/hang windowbox, and install flashing at roof apex to keep OUT the water. WHEW!

On the fencing, I need to DIG OUT the entire area. This is actually a good thing, because it's GREAT dirt there for some reason. The rest of the yard is rocky (good dirt, but filled with river rock), but this dirt is great. So, I'll transport it to another area of the yard, where I will use it to supplement the dirt in the garden. This is less dirt I will have to buy. Hurray! After digging out the area, I have to make the frame, then attach the fencing.

Gratuitous pup shot of the day. Caption should read: I lay like this when the humans are boring and not paying attention to me. 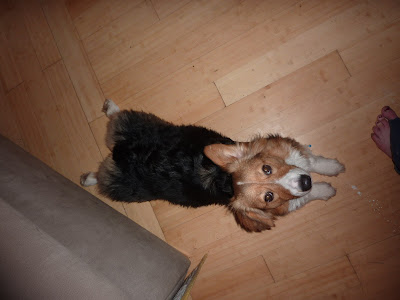 Other than that, this week's projects depend upon whether my neighbor gets a big truck bin delivered or not. If that's the case, projects will be re-routed and will instead be focused on getting as much yard waste from the yard as possible in order to take advantage of the big dump bin. If the big truck bin doesn't happen, then I can focus more on my projects.

Ooooh, and massive idea this weekend.... that big copperish wire leafy flower thing we have? I'm putting it on the hothouse/sprouthouse/greenhouse door! Photos later describing that project.... I need to draw up some plans.

Regardless of all the above, this week looks to be pretty busy at work, so I may not have as much time as last week to work on my fun things.
Posted by Jessika at 9:28 AM