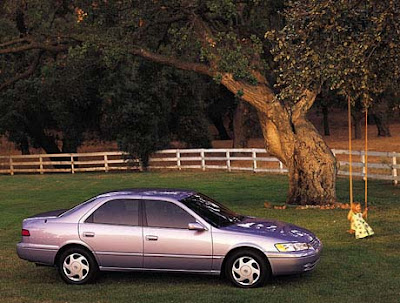 Ok, so she has 143k miles on her. And she has her quirks. But she runs like a new car out of the gate, does what I ask her to, can fit almost anything in her backseat/trunk, and really holds her own.

So this is why it was depressing when she failed the DMV Department of Environmental Quality (DEQ) test.

Ok, it wasn't so much depressing as it was infuriating. Goldie's check engine light came on about a year ago, and, being a dutiful car owner, I took her in to the mechanic. They poked around and determined NOTHING was wrong with her; it was just a malfunctioning sensor. I could fix it for a few $100, or I could let it be and basically be no worse off (except that I'd have to be good on tuning her up because now I'd have no check engine light to warn me b/c it was always on).

Fine fine. So I went to the DEQ on Saturday morning (yay weekend open hours), and DUE TO THE LIGHT/MALFUNCTIONING SENSOR, she failed.

Great. So I got to go spend money on a mechanic ($300!!!) just to fix a sensor that was malfunctioning. I get spending the money if the car actually was polluting or whatnot, but for this? But the light caused the system to fail at the DEQ, so, unless I wanted to drive illegally, I had no choice. Luckily, I found a mechanic who appears reasonable and honest. And he loves my car.

There was a blessing in all of this. Two actually. And for these I am willing to move past the stupid DMV for the time being.

First off, my check engine light is off. As I soon face 100 miles of commuting a day (round trip), it's nice to have a bit of warning from a light that something is amiss. I have wanted to fix the light, but it felt like a waste of money. Being forced to have it fixed still feels like a waste, but at least it's off now.

Second (and MORE IMPORTANTLY), the mechanic did an overall check on my car, for free. Now, I'm religious about changing the oil. And every other oil change I have my car overall inspected to make sure all is ok. The punks must have only checked the LEVEL of my transmission fluid, not the COLOR. What the hey, I know. So, what should have been a liquid of reddish clear color was (in Goldie) blackish and gucky.

AHH!! Had it continued in Goldie, her transmission could have been done for within the next year, easily. And a replacement like a transmission is a big cost, one which would have seriously made me ponder whether it would be better to replace it or cash her in. * tear!*

So, the mechanic changed the fluid, drove her around, and then changed the fluid again. Thoroughly flushed her system, in other words. I'll take her back into them in about a month just to have them check her out. Fingers crossed no permanent damage was done.

So the DEQ fail and the punk DMV ended up producing a good result. Maybe it's karma. Maybe everything happens for a reason. It's things like this that make me take a step back and think "whoa...". As painful as the $400 bill was (2 sensors, transmission flushing and fixing my emergency brake), it beats having to buy a whole new car, or having a massive breakdown on the freeway. It's also made me really ponder pestering B, who likes to think his beloved car will never ever break down. I think an overall tuneup may be in order. Who knows, maybe my experience is an overall kick for me to poke B to take his car in and maybe we'll get the same sort of "whoa..., thank goodness we did that!" that we did from my car. Regardless, he's soon goign to be driving the 100 miles a day also, so I suspect it will be beneficial for him too to start out on a good foot.

Anyway, that was Saturday's drama and Monday's car mechanic trip. More on berries and the rest of the weekend to come....
Posted by Jessika at 8:11 AM