Today after work, I'm going to check this out: 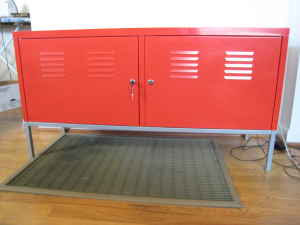 Now, you may wonder why, if we like craftsman/mission-style architecture so much, we are getting a red, metal locker. 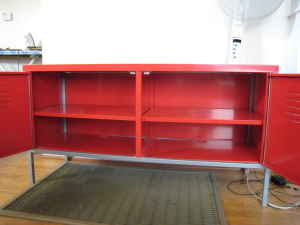 As per usual, we have a project for it. 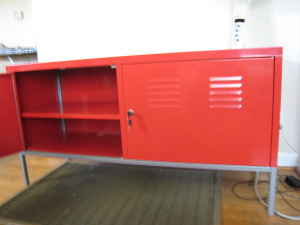 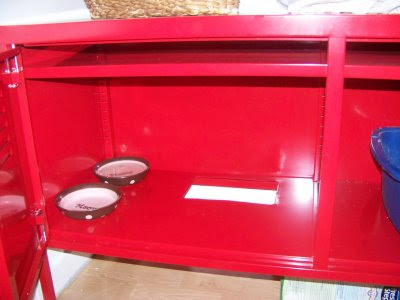 Really! Seriously! No joke!
*
I've been trying to find a long credenza-type piece of furniture, preferably with front doors like this for easy access to the litter. I HATE the litter box. HATE IT. They are really good about using it, but you get the grit/litter around the box, it smells, and where do you put it? There is not a good place to put a litter box.
*
So yesterday, I saw this article on ikeahacker. Another design for a hidden litterbox. Lovely, but I'm not spending $99 for something that may not work as a litter box. But then, at 5:30pm, it posted on craigslist for less than half that amount. WOOO! The SAME EXACT LOCKER!
*
We're going to change the design a bit. I think the entrance will be on the side via a little ramp. Our cats are not small; they're large (not fat, just they're large cats). I don't think they'll take to a hole in the floor of it. Plus, I don't want the hole; part of the joy in this design is that the spill-out litter is contained. A hole may ruin that.
*
So the design will be: entrance hole at one end, litter box at the other. Their mat will be next to the litter box, and they'll have to step into/out of the locker (thus further getting the little litter bits off their feet). PLUS, we can also stick some odor absorbers INSIDE the locker to further assist us, and we can put candles on top the locker.
*
It has ventilation, so it won't get stuffy, and the easy-access doors make it great for cleaning. We think the cats will really like it, as they generally like privacy when, um, using the litter box.
We aren't going to spring the new design on them for a few weeks though. We don't want too many changes for them, and they're already getting a new house next week!